I could never be described as a religious person.  True enough that I believe in the existence of some divine entity, perhaps a collective.  I don’t quite know what form that being takes. I have no objection to the use of the names that various folks give to their concept of a omniscient presence which guides, protects, or blesses humanity and its environment.  The question of how such a force can allow evil, wrongdoing, pain, and suffering troubles me more than what to call “it”.  Call it “God”.  Call it “Yahweh”.  Call it “the Holy Trinity”.

I’m less vague about angels.  You’ve heard the story of an angel pushing  my life force back into its corporal component on 09 February 1982 and telling me, “it’s not your time”.  I don’t need to expound.  Time and time again some vaguely white, vaguely human form visits me and provides caution or comfort.  They might be ghosts, my subconscious, or the jalapeno on the gluten-free pizza from the previous night’s binge.  But I elect to take the simplest route, and accept that these beings emanate from the divine.

My problem vests in religion, and so I stay away from it.  My mother converted to Catholicism and later married a Roman Catholic man.  I know she took some sustenance from the church but I also know she did not accept its teachings whole-hog.  We followed a renegade priest from parish to parish, protesting his subsequent ex-communication.  She actively lobbied for an end to war and for the legalization of abortion.  She gave me the strength to walk away from a church in which I did not feel welcome.   A decade after her death, I finally summoned enough courage to file a complaint against the priest who tried to steal whatever lingered of my innocence after the devastation of childhood.  If my mother had not taught me to be strong, I could not have conquered the nausea and drive to St. Louis some months later to protest any thought of his early reinstatement.

I tell you all of this because I want you to understand my essential philosophy and its evolution.  On top of these proclivities, I have layered twenty-five years in family law and ten as a guardian ad litem for foster children.  Into that swirling bog and following my son’s example, I poured the essence of nonviolent communication, a way of life that I have not yet perfected.  I had intended to also study Buddhism, but I’ve met a few Buddhists in recent years, and from them, I’ve learned enough to know that its tenets hold a quagmire of negativity and condemnation which I cannot justify espousing.

And so, that’s my backdrop:  Recovering Catholic, aspiring pacifist, striving for nonjudgment and tolerance.

In that frame of mind, with those experiences and that outlook, I come to the brink of my sixty-third year, which starts in two months.  I’m getting ready to be a different version of myself.  I’ve left my long-time home.  I’ve lost my third husband to divorce.  I quit my job, one which I created for myself and have had for two and a half decades.  I moved two-thousand miles to a warmer climate and a rural setting.  I downsized from fourteen hundred square feet to a tiny house on wheels with two lofts and a composting toilet.  I shocked my family, horrified many of my friends, and delighted a few folks whom I had no idea even cared.

At a time in my life when I should be retiring, I’ve spent six months job-hunting with no luck.  I’m watching my acquaintances post pictures of exotic trips that they can take because of careful financial planning or clever management or the support of enduring marriages.  I sit in my 198-square-foot abode and will myself to breathe, to unclench my stomach muscles and forcibly lower my shoulders to ease the spasm of tension.  Rather than living vicariously by reading engaging missives from my son or cheerfully waiting for grandchildren, I’m forging a new life and making a whole host of fresh connections.  My son must be tempted to resent me but I do not intend to steal his thunder.  It’s his time, yes; but I could not perpetuate the existence which had accumulated around me.  Despite its positive notes, on the whole, it did not suit me.

I mean no disrespect to the artists who showed in my public art space at Suite 100 or the friends who populated my days.  I appreciated having them in my life.  But I had become a rank observer.  I facilitated the success of others. I observed the happy times around me without generating memories of my own.    For whatever set of reasons, my foolish choices or my hollow inaction, I had come to live in perpetual silence, unbroken by anything that I did not forcibly manufacture.  In the final analysis, I had tiptoed clumsily through sixty-two years with no thought of or preparation for permanence.  About a year ago, I discovered that I no longer could be content with that cold reality.  And so I left.

In doing so, I trusted that the divine would not fail me and the angels would not abandon me.  As my old friend Jeanne Ashworth would have said, I stepped into the breach expecting to be caught.  I’m still falling, but a few handholds have presented themselves to slow my descent.  I get a little nervous, but I’m expecting to survive the landing.

I see the eye rolls from time to time even now.  “You’re doing what?” they ask.  “And where?”  They turn away, and then summon a semblance of enthusiasm. These charades do not deceive me.   Those folks can’t imagine being happy living in a cedar tiny house called Angel’s Haven, in an RV park on a lazy river.  They don’t understand why I’d surrender my law practice in favor of an increasingly frantic search for employment.  Face it:  the people who find my move perplexing also don’t understand anything else that I’ve ever done, the good, the bad, the ugly, the wonderful, the absurd.  They think I’ve failed at everything.  They make no pretense at graciousness, at allowing that my life might have held a little value now and then.  And there are more of them than you might think, and they do not hesitate to express their opinion of me.

Before I left Kansas City, at my farewell art event, I heard one woman say to another, “Did you hear what Corinne is doing?  Remind me not to get divorced, I think hers made her crazy.”  She didn’t realize that her voice carried.  Her companion saw my face and shushed her, but the smug superiority which prompted the remark prevented the speaker from feeling the least bit ashamed for having judged me.

I’ve heard it said that living well is the best revenge.  That might be true.  But I think we over-rate revenge.  Moreover, and perhaps more tellingly, I no longer accept the definition of “living well” which society endorses.  I cannot precisely tell you what “living well” means to me now, but, to quote Justice Stewart albeit wildly out of context, I’ll know it when I see it.

It’s the seventh day of the fifty-fifth month of My Year Without Complaining.  Life continues. 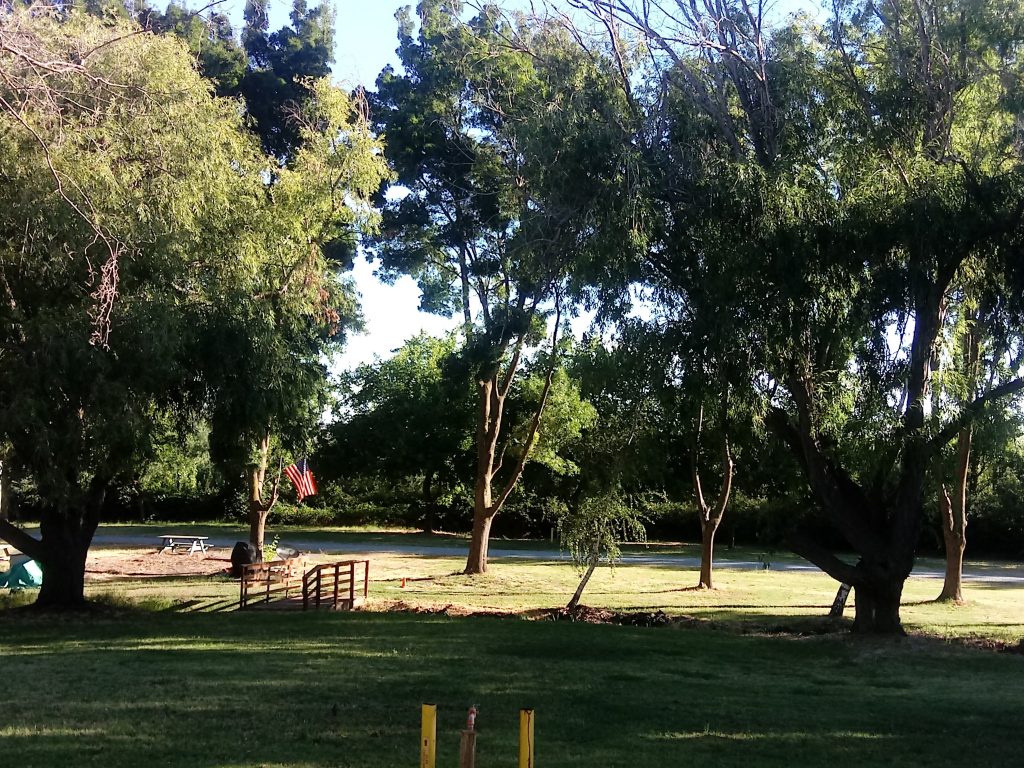 The meadow behind my house, Park Delta Bay, on the California Delta Loop, Sacramento County, California.

6 thoughts on “Judge Not”