Early in the pandemic, I decided — along with thousands of lonely Americans — to learn how to make sourdough bread.  I watched several videos, read a few blog entries, consulted a friend, and ventured forth into the realm of the unknown.  I fed a jar of flour and water every day, staring into its recesses waiting for life to bubble forth.   After six days, I plunged my hands into a well of gluten-free flour and the slightly odiferous contents of the covered container.  About an hour and a half later, I drew a virtual rock from the stove.  I think it broke my knife.

Spring melted into shimmering summer and I started to laboriously scrutinize a particular Canadian sewing expert whose demeanor suggested that I could do anything she demonstrated.  After a month of consuming her vibrant videos and listening to her lilting voice, I very nearly bought a machine.  Luckily, I remembered that I had inherited my mother’s Kenmore and had surrendered it to one of my sisters a dozen years later, the thick coat of dust testifying to its perpetual disuse.

Closer to fall, I delved into the drawled Scottish burr of a twenty-something writer with a plethora of self-acknowledged neuroses and a morbid fascination with books.  I stared in fascination at the rigidity of her pose and the bright red of her lips against the absolute crystal sheen of her complexion. My eyes widened as she recited an alphabetized list of instructions for how to savagely eliminate debt, clutter, and expectations of decent treatment from one’s fellow but slightly lesser humanity.  I actually joined her Patreon.  This gained me access to her personal writing.  I gobbled the first paragraphs with unabashed eagerness which rapidly devolved into a sickening regret.  I haven’t looked at a clip of hers since November though the small monthly contribution keeps drawing from my account.

There followed a series of subscriptions to Canadian DIYers, all fashionably attired women of my son’s generation who install cabinetry with bare midriffs and exposed toes.  They enthralled me with IKEA hacks, thrift-flips, and some intriguing painting techniques.  Admittedly, I myself would never use a sponge treatment on my bedroom walls, assuming, for the sake of argument, that I actually had a bedroom in my 198 square foot tiny house.  Pink pom-poms, tiled coffee tables, and curtains hung two feet above the windows rounded out their favorite decor.   Their dogs pick their projects, or their Instagram followers vote on the shade which they will paint their kitchens, or they throw a dart to determine how many rounds of jute they will hot-glue to the mirror that they found on the curb.

For the last month, I’ve delved into the pre-pandemic seasons of Master Chef UK.   I cannot understand most of what the contestants say, and when I do manage to catch a word or two, my mind stumbles over unfamiliar vernacular.  Those silly Brits don’t use the same words as we loopy Yanks; moreover, they add and drop the letter “H” with dizzying unpredictability.  I’ve seen some interesting culinary presentations, though, including a chocolate mousse with a black olive Tuille.  Seriously.

From all of this, five truths emerge which I learned from binge-watching YouTube.

I’m probably never going to own a hot-glue gun or one of those drill-thingies with which you can bore a hole in MDF or drive a screw into three-inch metal.

Whatever you call the generation now in their mid-twenties has far too much free time on their hands which might or might not be the fault of the pandemic.

Success in the culinary world requires long tweezers, an understanding of what flowers can be eaten, and lots of flaky salt.

There is absolutely no chance that I would ever purchase anything from a commercial which interrupts the flow of bubbly, youthful creativity on a 4 x 6 screen.

Anyone who can successfully execute a recipe for sourdough bread should automatically receive a place in heaven.

It’s the twenty-ninth day of the eighty-seventh month of My Year Without Complaining.  Life continues. 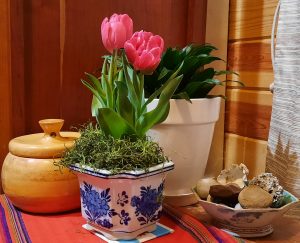