When I was eight or nine, I told my mother that i wanted to be a ballerina.  The look with which she reacted remains a potent memory.  We stood in the kitchen at the house in which we lived for my entire life.  Her hands rested on a bowl of bread dough.  She looked away after holding my gaze for several minutes.

I lowered my eyes to the notice in my hands.  I had been invited to join a dance class.  I needed parental permission.  I knew we had no money; but a sentence at the bottom gave me hope:  “Scholarships available.”  I guessed what that meant; it meant that poor kids might go.  It didn’t occur to me that I might not qualify for other reasons.

My mother’s voice dropped to a low tone, lower even than her normal pitch.  I don’t think you should get your hopes up, Mary, she said.

I’ve never been light on my feet, not then, not at my lowest adult weight, around 85 pounds at age 55.  As a little girl, I hit the ground so often that my classmates called me “the little crippled girl”.  My mother said, here, knead this, and turned the dough out onto the counter in a sheen of flour.  I stepped forward and put the flyer aside.  She touched my shoulder.

I heard her on the telephone later, telling whoever had invited me that I would not be attending the dance class.  I hovered in the other room, straining to her the logic that she used.  I did not really understand but I felt a hot stain of shame in my chest.

The other day, I stepped over the pets’ gravestones which I brought to California from our home in Missouri.  Tiger Tazmania has a flat stone on which his name is engraved.  He’s proclaimed to be “The Scum Cat”.  Sprinkle just had the large yellow stone which my son and his best friend brought home from our western adventures.  They sit beside the new little pathway to my house here.  I don’t know why I didn’t walk around them.  I sprawled across the ground in an inglorious heap.  It took me ten minutes to pull myself from the steps on which I landed.

Tonight, as I watch Olympic skater after Olympic skater reach for the gold, my heart clenches when one stumbles.  I feel their pain, though it isn’t the same; it only seemed to me that the whole world watched every time I fell.

It’s the twentieth day of the fiftieth month of My Year Without Complaining.  Life continues. 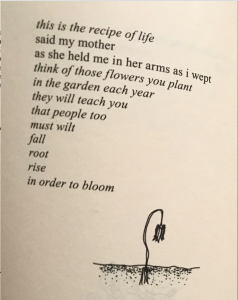