I’ve done a lot of falling in my life.

I’ve fallen behind in my bills.

I’ve fallen by the wayside.

I’ve fallen for a trick or two, more than once.

But the more significant falls have been at critical moments:  When walking down the steps of the stage at my law school graduation; in a dark dormitory hallway; once in a courtroom in front of a jury.

I tried to explain my falls to one of the fancy Stanford doctors.  His eyes lit and he pulled his resident closer and asked me to begin again.  I drew a breath and started over, talking about weak musculature, uncontrollable spasticity, and proprioceptor sensation.  I strained to explain the sharp little warnings I get of an impending collapse.  They nodded as though I made sense, and clicked on the electronic medical records tablet.  I glanced over my shoulder for signs of an impending straight jacket.

I’ve collected some hilarious responses to my falls, from my friend Alan’s “don’t you have reverse?” to a long-ago colleague’s assurances to our boss that falling was my second job.  “After what?” came the question.  “Single-parenting,” he said.  My boss looked dubious.

On the law school occasion, my mother later breathed a sign of relief that I had taken the tumble.  “I didn’t think it was really you until you fell,” she explained.  I totally understood.

Every host or hostess has been instructed to drag me out into their street if I fall.  “You’d be surprised at the paperwork when a disabled lawyer trips,” I tell them.  “Don’t call 911 until I’m safely deposited on the roadway.  Disavow knowledge of me entirely.”  They know that I’m serious.  I’ve got health insurance; I don’t need them to suffer the pain of subrogation.

The first time someone sees me fall always frightens them.  They feel responsible, nervous, worried.  They want to hoist me off the floor and shove me into a wheelchair, mostly for their own peace of mind.  I try not to suffer humiliation, though the pitying looks of passing strangers might as well be daggers to the heart.  I assure everyone that I’m fine; that I always fall; that I can get off the ground unassisted.  It’s mostly true, though left to my own devices, it could take thirty minutes or more.  I keep my cell phone handy.

I’ve broken hands, elbows, and feet falling through space, on gravel, and in front of moving vehicles.  I’ve got a hip that spontaneously dislocates and I can tell you if it’s going to rain in Saigon at least a week in advance.  Nobody falls with grace, but I make an art of the clumsy spill despite tumbling lessons as a child and decades of physical therapy.

It can’t be easy living with someone who falls a lot, which might in part explain my 300 divorces.  But I have reached the point in my life at which I only cry a little.  It’s more likely that I will laugh, whether from embarrassment, giddiness, or sheer hysteria.  Laughter — the best medicine, right?  Of course it is.  On the way to the ground, I’m already thinking how funny: to be so awkward, to bounce so poorly.

But I’m not complaining.  It could be worse, a lot worse.  So I’ll pick myself up, brush myself off, and start all over again.  Once more, with feeling.

It’s the twenty-fifth day of the forty-sixth month of My Year Without Complaining.  Life continues. 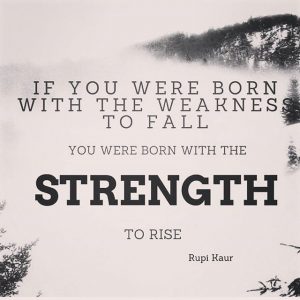 One thought on “Falling”