The drive to work takes me past the fields of Andrus Island, flooded now from a week of unrelenting storms.  I stop in a precarious spot and check my rearview mirror.  With a small regretful smile, I raise the cell phone and snap a photo.  Even my rudimentary Canon would take a better shot, but I have gotten out of the habit of carrying it.  I shake my head, glance in the mirror again, and shift into drive.

Later, I will scroll through the frames, squinting, indecisive.  Those could be swans, I  will tell myself.  A few years ago, I got a perfect shot of two trumpet swans in the slough, but an online stalker stole the images from my Instagram and blast them out across the internet.  Using the  photograph seems shabby now. I see it from time to time in random searches and want to holler, “I took that!”  But no one cares.  Anytime I think I’ve found another swan, I snap and snap.  But it’s never the same.

Indeed, I think these might have been swans though I’m no expert.  They could be mere geese putting on airs.  I look in the mirror and see a plump, dowdy woman.  But in her eyes lurks the slender lass of fifty-five with her promising middle age still ahead.  She thought herself a swan, like the birds in the pond of Mary Poppins’ park, grandly sailing by, convinced of their smartness.  She got her come-uppance though; but unlike the reluctant souls in that favorite book of my childhood, she’s never seen the virtues of her simple, honest self.

The shimmer of light on water lingered in my mind today.  It occurred to me that the birds might have fancied themselves at sea, rather than just on a few inches of rain in a muddy patch of land.  I paused overlong at the intersection, eyes staring sightless at the road.  Certainly, those water fowl — whether goose or swan — seemed content.  What difference did the shallowness of the water make to them?  The pure sky stretched overhead.  The air rippled with an earthy fragrance.  Beneath the surface,  tasty bugs wiggled in the muck.  Those swans drifted — and if in fact, they were not swans but geese, their drifting seemed none the less pleasant for their inferior status.

The sound of someone’s softly tapped horn shook me from my reverie.  I made the turn and headed into town.  Later, when night had fallen, I studied the photograph of the birds in the flooded field.  I am none the wiser as to their true nature, but I know they swam without the burden of a single care in the misty Delta morning.

It’s the eighteenth day of the one-hundred and ninth month of My Year Without Complaining.  Life continues. 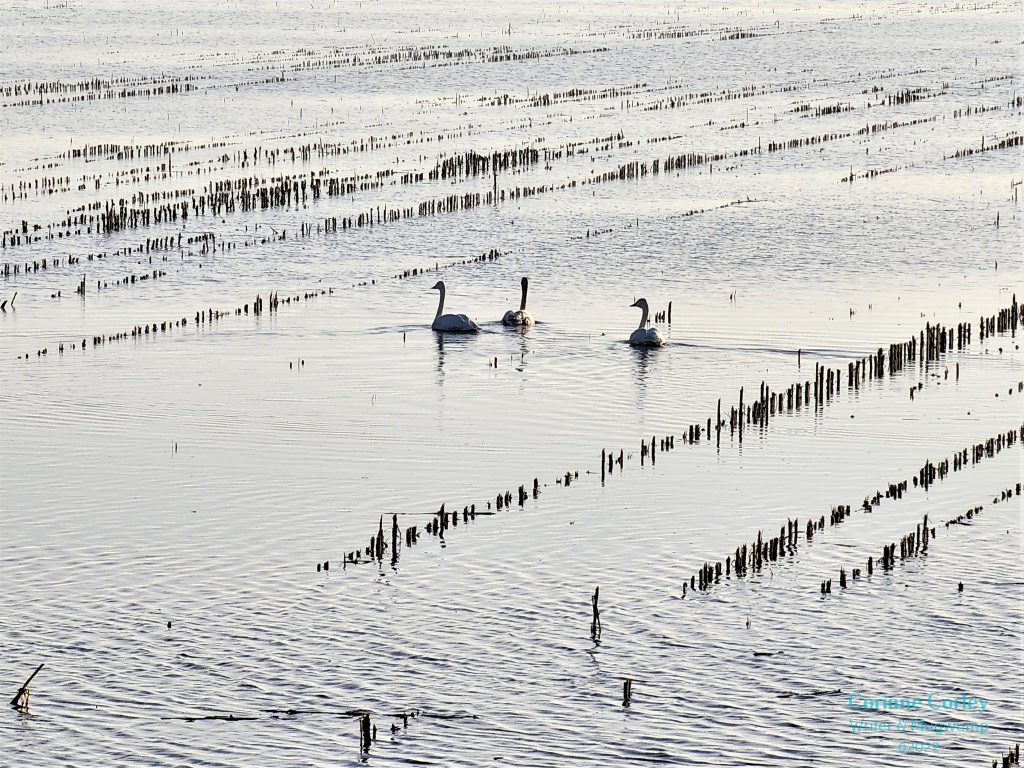