Power just went out at the hostel.  I’m amused.

But this is what I wanted to say —

A heavy-legged woman in a purple velvet skirt and rubber flip-flops carrying a salmon-colored purse and wearing a green padded jacket.

Fine lines on a face in the mirror.

Headphones spanning from ear to ear over silver hair above a MacBook bearing a sheaf of stickers from around the world.

Turquoise leather suitcases rolled through a long hallway past a seven-foot map of the world.

Pictures of pleasant shining faces on a cork-board under cursive letters inviting me to Meet Our Staff.

A sign announcing that I had found the ADA KITCHEN.

Trees rising above a great expanse of tender spring grass beyond which the driveway sloped down to the Bay.

A dozen band posters dancing across the wall under a dangling disco ball over a globe sitting on an old scratched piano.

Children scurrying after their father while their mother bade them Good luck with some adventure on which she had elected not to join them.

Lean, tanned men speaking German and studying their cell phones without glancing once at each other.

An unlit gas stove with a hood and a pipe rising into a twenty-foot ceiling.

Books leaning on shelves waiting to be read.

An empty car crumpled against an embankment just after it spun sideways on an exit ramp north of the Golden Gate Bridge.

The ocean, from the top of Mount Tamalpais, lapping the shores of Stinson Beach,swallowing sand strewn with abandoned buckets and forgotten shoes. 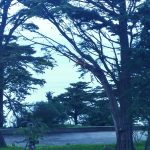 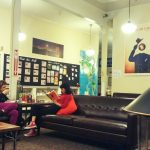 The lounge and the wall of staff members 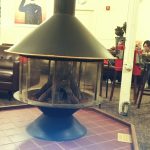 I wish this were lit. 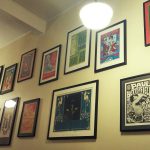 Glad to see the skull and roses 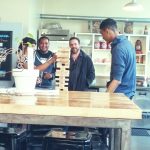 Jenga at the Cafe 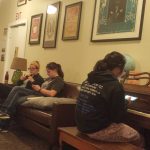 After a few minutes of studying her phone, the young lady began to play and sing.