Joyce and I had reckoned without the Katy Trail bike race.  When I arrived in Rocheport at 12:15, I skirted around five bikers, a slew of orange cones, and hordes of families laden with folding chairs and coolers walking towards the park.  A quick re-group brought me back up the hill to the Blufftop Bistro which, curiously, never filled more than half its tables for the three hours that we lingered over lunch.

I had ten minutes alone at the table with a bitter mug of coffee before Joyce arrived.  I gazed down over the Missouri River, struck by the stark difference between its wide muddy expanse and the shimmering blue of the San Joaquin.  Then I spied my big sister strolling through the door, bright orange iPad in one hand, the inevitable present in the other.  She crossed the expanse of the place, under its lofting beams, and we folded into each other’s arms.

If you’re a sister, you know what sister lunches mean:  competing over the check; unending unconditional support; mutual commiseration; updates on each other’s children; giggles; and a few random tears.  We got the waitress to take photos and squabbled over who looked worse, each of us claiming the title.  I loaded the Facebook app on her iPad and posted a sisters-picture to her timeline.  I used my phone to similar end.  As technologically dull as I believe  myself to be, my big sister surpasses me in that.  But she takes the prize in sister-presents. I had none for her and she bore two sweet china angels with September birthday trappings, along with a garden stone carved with a tribute to the forever friendship of sisterhood.

We made plans for a repeat visit, better planned than this impromptu thing — call Adrienne to see if she can join us; get Patrick to come from Chicago; text a group shot to Ann.  Then we parted in the parking lot just before 4:00 p.m.  I made hay while the sun still shone and got to Kansas City two hours later.  By 6:30, I sat at Paula and Sheldon’s table full of vegetarian, healthy dinner fare, thinking of the afternoon by the river, wondering, for the hundredth time, how I got so lucky as to hit the sister jackpot.

It’s the twenty-sixth day of the fiftieth month of My Year Without Complaining.  Life continues. 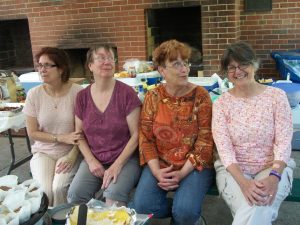 My three sisters are sitting
on rocks of black obsidian.
For the first time, in this light, I can see who they are.

My first sister is sewing her costume for the procession.
She is going as the Transparent Lady
and all her nerves will be visible.

My second sister is also sewing,
at the seam over her heart which has never healed entirely.
At last, she hopes, this tightness in her chest will ease.

My third sister is gazing
at a dark-red crust spreading westward far out on the sea.
Her stockings are torn but she is beautiful.

One thought on “By the river”