When you’ve known someone for 35 years, you have a lot of ups and downs in your relate.  Thus so with Alan White, who just retired after working with me for 24 of the 35 years since we met.  I don’t appreciate him enough, or maybe I should say — I don’t show enough appreciation for him.  So this is my song for you, Charles Alan White.

I’m not complaining about anything to do with the decades of our friendship.  I’ve caused him far more grief than he has given me.  He’s stuck by me loyally — when we made money, when we didn’t; when we had clients clamoring at our door and when we worked from a dining room table on Baltimore Street.  He knows where all the bodies are buried; hell, he dug the holes and threw most of them in the deepest of graves to protect me.

Alan attended all three of my weddings.  He served as best man at my first, while a well-intentioned woman slaughtered one of his beautiful songs.  He sang at two of them, if memory serves.  He celebrated with me in the joyful dawn of each adventure, and held me when the sobs of failure wracked my heart.

Alan and I do not always agree.  At times our discord bleeds with the crimson flow of genuine suffering.  Sometimes the disharmony vanishes as it plumes into the air, vaporous insubstantial bickering over irrelevant minutia. He snaps, I respond; I bleat, he rebels.  The next day our voices soften, anger forgotten in the flow of eternal empathy.

I could not have raised my son, represented my clients, or endured migraines without his tenderness.  I owe him more than I can articulate even with the nimble flow of my lily white spastic hands across the keyboard.

I gave my son the middle name “Charles” because of Alan.  He guided me in nurturing Patrick’s musical gift.  He coached me in talking with boys about so many areas, too  many to name, too important to articulate without embarrassing both “Uncle Alan” and his adopted nephew.  But he knows, and Patrick knows, and I know.  The rest of you can imagine and share my thankfulness.

I played Alan’s first album on my dead mother’s turntable from a mountaintop in Fayetteville during lonely evenings after my marriage to his brother failed.  I wrote long letters to him in Kansas City and received longer ones from him in Arkansas.  He talked of people we knew, and places we had frequented, and feelings we had shared.  He was my first best guy friend.  I sang his songs to my unborn child.

His son calls me “aunt” to this day.  I cherish the connection.

I can’t take back any misstep that I made with Alan in our friendship but he would never begrudge me them.  In the debris that I sometimes think will never be more than my lot, he navigated a life boat in the stormiest of harbors.  He gave me violins in the wind.  He created a soundtrack for my tragic love affairs.  He served as a constant reminder that regardless of the soot which covered my soul, someone would continue to cherish me.

Alan has never wavered in his friendship, despite my weakness, despite my treachery.  I send him what passes for my gratitude, knowing that no expression of remorse would be necessary.  If you see him, tell him that someone destined for the quiet of northern California will be playing his music all across America, and smiling as she sings off-key.

It’s the twenty-second day of the forty-seventh month of My Year Without Complaining.  Life continues. 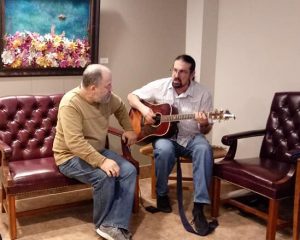