From 1998 to 2009, I was married to a man who principally ambulated by means of a series of wheelchairs which, quite frankly, both of us resented.  We might have forestalled a lot of drama if we had articulated our frustration with the limitations but we gamely soldiered forward.  I pushed the manual chairs when the terrain challenged him.   On our honeymoon, we stayed at an old hotel in Taos which professed to have made part of the grounds accessible.  The main accommodation consisted of a house phone situated on the terraced stairs at the precise juncture where, on at least two occasions, I tipped him out of the chair and onto his face.

I thought about Dennis as I squirmed in the Denver airport for three hours today.  I had planted my bony butt in the unpadded seat of an over-sanitized, double-wide Southwest Airlines ancient wheelchair.  Dennis taught me that clerks, cashiers, and waitstaff develop an uncanny ability to look right through disabled people.  One ticketing agent at KCI asked me if Dennis would be taking his wheelchair on the flight with him.  I turned my head toward my husband and drawled, “Dear, will you be taking your wheelchair on the flight with you?”  His exaggerated reply, to me, I then communicated to the agent in a loud voice.  Her face flushed crimson.  I gently said, “He’s disabled, but he’s not deaf; and he’s smarter than both of us together.”  She had the grace to apologize.

Southwest Airlines changed my original nonstop flight from Sacramento to Kansas City three times before today and once during the Denver layover.  As a result, my stress level climbed to astronomical heights.  I do not like to drive at night, especially an unfamiliar vehicle and on the highway.  Change flusters me.  As I strained to hear the new gate number over the crackling PA system, anxiety overtook me.  I could not find an attendant willing to wheel me from Gate c-47 to the farthest end of the concourse, Gate C-25.  It took twenty minutes and three tries, by which time I had gotten positively frantic since boarding would already have commenced.

I needn’t have worried.  The new plane developed mysterious mechanical issues resulting in another hour’s delay.  As I sat nibbling trail mix, I thought about the time a boyfriend and I had flown from St. Louis to Boston at the exact moment that the air traffic controller strike started.  We got re-routed to Atlanta where we spent twenty hours riding the tram and drinking free booze.  We rolled into Martha’s Vineyard two days late, hungover, hungry, and ready for the beach.

When I finally landed in Kansas City this evening, a rush of warm muggy air welled around me.   A friendly attendant chatted about his recent relocation from Milwaukee and planned decampment to yet another city, maybe Philly, maybe Houston.  The bus driver lowered the kneeler for me to glide with ease into a seat for the ride off-site to the rental car building.  When I told the car guy that I have to bring a cedar chest to St. Louis, he gave me a free upgrade to a spanking-new Mitsubishi that smells like a million bucks, though truth be told, I’ve never sniffed so much as a grand.  But you know what I mean.

My fears of disorientation faded as I glided down I-29.  Nighttime in Kansas City looks nothing like the dark of the California Delta.  On the Delta Loop, a coyote might easily step in front of your car.  The river winds its wide way through nights lit only by the moon, several feet below the steep, narrow levee roads.   Here  I eased southward past broad stretches of commercial buildings and shopping centers.  Then the road swept downward in a wide arc.    I crossed a river that is not my river anymore, over a suspension bridge that never raises, or lowers, or swings wide to let a freighter pass.  I did not see a little house on that bridge; I did not honk to let my friend Demi the bridge tender know that I had come by.   The car moved forward unimpeded.  I glanced to my right and saw the city.

I followed the ramp to Highway 71, exited at 22nd street, and turned left at Hospital Hill.   I turned off my motor in the driveway of my AirBnB, an apartment over a garage in a house just a few blocks from the Juvenile Court where I no longer practice; a half-dozen miles from the Jackson County Circuit Courthouse, the hallways of which I have not traversed for three years.  Into the stillness of the car came the steady throb of passing traffic, a sound that has grown so  unfamiliar as to be momentarily unrecognizable.  I glanced down at my phone just as my GPS lady realized that I had come to a halt and boldly announced, “You have arrived.”  I smiled.  I sat for a few more seconds, then eased myself out of the car, and dragged my suitcase up the stairs and into my home away from home.

It’s the thirty-first day of the ninety-second month of My Year Without Complaining.  Life continues. 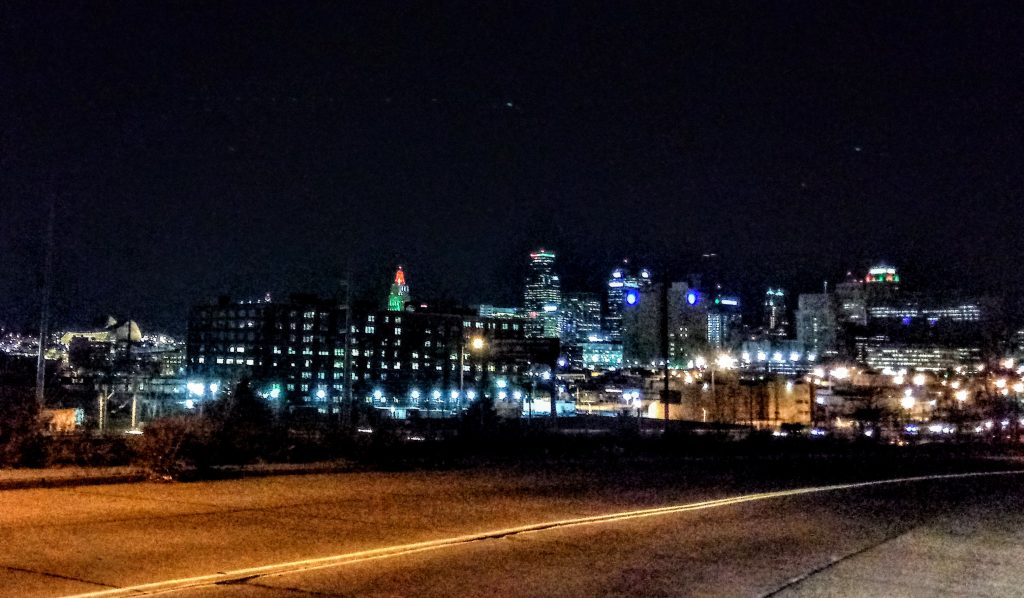