When the sun rose this morning, I dragged myself out of bed to see it.  I beat the alarm by a few minutes. I woke to another Monday in paradise, sixty degrees at six a.m. and an impeccably clear sky.

I’m still astonished by the sorrow which I felt at the passing of a great statesman this past weekend.  I didn’t follow John McCain’s entire career, but I knew enough of him to feel deep admiration.  On the heels of his death came another unexpected and sad one: that of the playwright Neil Simon.  It seems an era in which I feel comfortable threatens to close its door.

I don’t necessarily identify with either man, though  I can acknowledge that each, in his own way, contributed to the betterment of our world.

I’m more of a Tennessee Williams person, dark, deep, and a little warped.  But I have my sunny side and for reasons that I cannot articulate, a glow followed me south, to Palo Alto, where I waited like a sheep for my turn at the cardiology trough.  Slap and tickle; pronounced stable; sent on my way just in time for rush hour.  Ah, well:  I took myself out to an excellent vegan dinner; then down the street for an indulgent dessert with coffee and a little background music to send me northeast and Delta-bound.

As I sit here contemplating life, liberty, and the pursuit of happiness, I remember meeting a young barrista here named Tiffany Flores.  She’s since moved back to her home state — Washington, I think; north in any event.  I have met so many people on my various visits to California.  It seems that I spun a whole web of connections out here.  Maybe I’ve stretched taught strings on which to play some tender serenade.  Or perhaps I’ve constructed a stepping stone path of piano keys.  I need a new soundtrack for my life, something other than the dirge which has followed me for decades.

I heard an interview today with a woman who has written a book about how getting a dog saved her from depression.  Her description of her pre-canine mood resonated with me.  She talked about feeling worthless and not wanting to interact with anyone.  She felt that she would be judged and found grossly deficient.  I heard much of my attitude for my entire life in her words.  I found myself driving and shaking my head.  I kept asking myself, How do we get to the point at which we reject ourselves in anticipation of feared condemnation by those around us?

Ah well.  Finish the coffee, rise, exit the store.  Start the engine; put the car in gear; hit the road. I’m not quitting now, so what can I do but pull myself up by my bootstraps and go?

It’s the twenty-seventh day of the fifty-sixth month of My Year Without Complaining.  Life continues. 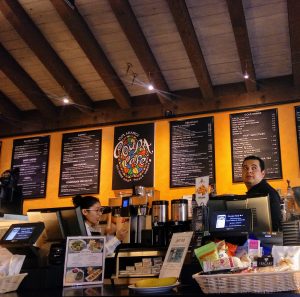 Martina McBride:  “This One’s for the Girls”