After my mother’s death in 1985, my sister Joyce became the steward of my father until he died in 1991.  She brought him McDonald’s breakfast each morning on her way to work.  She took him to the grocery store and helped him with any other errands.  Because he did not drive, she became his wheels as well as his planner, his social director, and his budgeter.  She orchestrated the purchase of presents for grandchildren in his name.

I visited my father just once during that six-year span.  I stood in the kitchen and stared at the row of little paper medicine vials on the counter, each with a time written in ballpoint pen.  Empty cups represented medication doses already taken.  I touched my finger to the edge of one, recognizing the slanted printing of my left-handed sister.

This morning I hauled four bottles from the crowded bathroom shelf and dumped them next to the toaster.  I shook pills into my hand and swallowed them with bottled water.  A news announcer’s voice reminded me of the impending shelter-in-place.  I can keep working; I’m one of those lucky souls in an essential profession.  But my preferred bottled water might grow scarce.  The grocery would be crowded with people worried about shortages.  I knew that I would have to stop at the store after work.  I turned away, leaving my prescriptions on the counter, only vaguely feeling a ripple of kinship with my father.

I pressed hard through the workday, always worried that I will not add sufficient value, like the careworn spinster daughter sweeping bare the kitchen floor.  Just after five, I started to hammer out my normal evening’s email, In case I get hit by a bus tonight, here’s where things stand on my task list.  But one more urgent letter had to be written and I scrambled to send the missive on its way.  I turned off the computer, switched out the light, and reminded myself that we don’t have public busses on Andrus Island anyway.  I should be safe.

I sat in my car in front of the grocery store, feeling the throb of pain in my legs.  One more week, I whispered.  One more week until the consult with that intense neurologist who thinks he knows better than the six or ten specialists before him.  I sighed and slipped from the car, holding on to the mirror as I stepped over the barricade and dodged the trash can inexplicably blocking the path from the handicapped space.  I tried not to sigh.

Of course my cart had a wonky wheel.  I pushed and jerked the thing around the aisles, willing my eyes to smile above my mask when I passed the little old ladies shopping for their fussy cats and their grumpy husbands.  In the checkout lane, I called the cashier’s attention to the weekly special.   I tendered my frequent shopper card for the points to exchange for the free item, then carefully moved to the far end to pay.

I watched the lady start to bag my purchases.  I hesitated, then asked if she could separate the four liters of water.  I can’t lift a bag with four bottles of water, I said, thinking that my son would roll his eyes at my compulsion to explain.  She answered, It’s really light, and demonstrated by raising the bag over her head.

I’m sorry, but I would not be able to lift that, I repeated, lowering my voice, aware of the growing line of evening shoppers.  It’s not heavy, she repeated, and again lifted it from the counter.  Nonetheless, it would be too heavy for me, I repeated, pitching my tone somewhere between supplication and surrender.

She sighed.  I’ll have to charge you for another bag, she warned.  I assured her that I did not mind, just as the man behind me pulled his cart away to find a faster lane.  I skittered out of the store, thinking about my sister, my father, my son who would have carried the lot for me at another place, in another time.  Tears welled in my eyes, hot and angry.  I struggled to open the car and drag the bags from buggy to backseat.  My hands shook.  I finally got everything settled, fell into the front seat, and pushed the starter.

I drove home in the gloom and cold of a Delta December night.  One by one I lifted the bags from the car.  I walked each one across the uneven ten feet to my porch:  back and forth, until all five balanced on the top step.  I wrapped my sweater tight around my shoulders.  I stepped through the leaves to my tiny, dark house.

And then I saw it:  A lovely basket at my door, the fragrance of fresh citrus picked just last weekend wafting through the air.  I knew who had left it — a young lady who lives in our marina.  I held it, with its jaunty bow and its pungent smell of lemon.  I could not stop the tears, of joy this time, and I pray that no one needs me to explain how I could tell the difference.

It’s the tenth day of the eighty-fourth month of My Year Without Complaining.  Life continues. 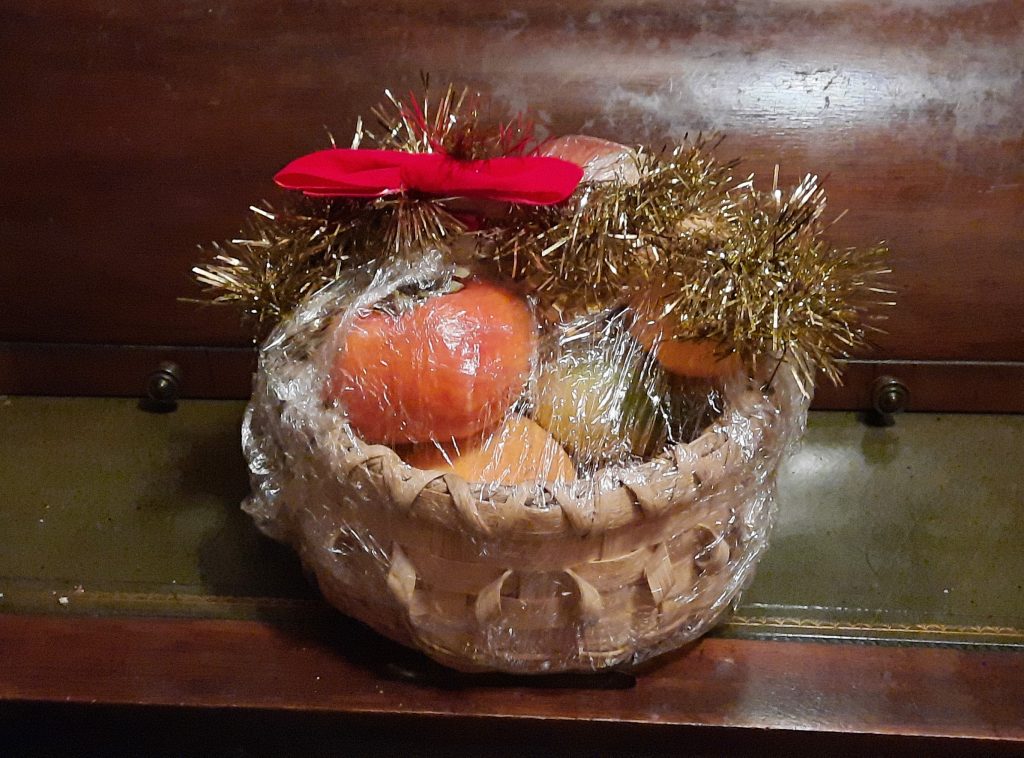