A pair of hawks recently established residence on Jackson Slough Road.  I first saw them about a month ago.  I’ve been stalking them, though  I never see the pair when I have my Canon with me.  The rinky-dink lens in my cell phone can’t do justice to them.  But still I try.

Any time I see a largish bird perched on one of the poles or overhead in a tree, I crane my neck.  With soft shoulders and open fields on either side of the narrow road, Jackson Slough affords little chance for anything but the hastiest of snaps.  Trucks and weary residents coming home or journeying to work need passage.  My determination holds nonetheless.

Sometimes I think that I’m seeing many birds.  Often a raven overhead tricks me into thinking that I’ll get my shot this time.  Once in a while, a heron makes its way over the fields, though many of them have gone north by now.  What passes for summer here drives them towards Canada or up to the cooler stretches of the Pacific coast.

The hawks and I have some kind of connection.  As I write, a brief storm breaks. I worry that they will not find shelter.  I’ve been reading about these majestic birds.  I imagine them as mates for life, glancing at each other across the leafy expanse of the tree in which I see them as I pass each evening.  They know of my quest.  They won’t thwart me, but neither will they cooperate.  If I capture a decent image, they will not protest.  But I must stalk them on their terms.  They rise into the air when my car nears, leaving me immobilized below their easy escape.

I first saw the pair on April 17th.  One sat on a pole just beyond the roadway.  The other soared towards us, far overhead.  We both waited. I cannot speak for the hawk on his perch, but I held my breath the entire time.

I got a quick picture.  I planned to photograph his lift-off, but  unexpectedly, he twisted and turned toward me.  Our eyes met as his wings reached their full span and he rose into the air.  I dropped my phone in astonishment.  I’ve never seen a bird of prey so close that I could count his feathers and comprehend his unchecked power.

I concede that I might be seeing many birds, rather than the same two.  Maybe none of them are even hawks.  Even if they are, I might never get a decent chance to take a picture.  I’ll keep trying though.  I’m on a mission; and the birds don’t seem offended in the least.

It’s the twenty-third day of the sixty-fifth month of My Year Without Complaining.  Life continues. 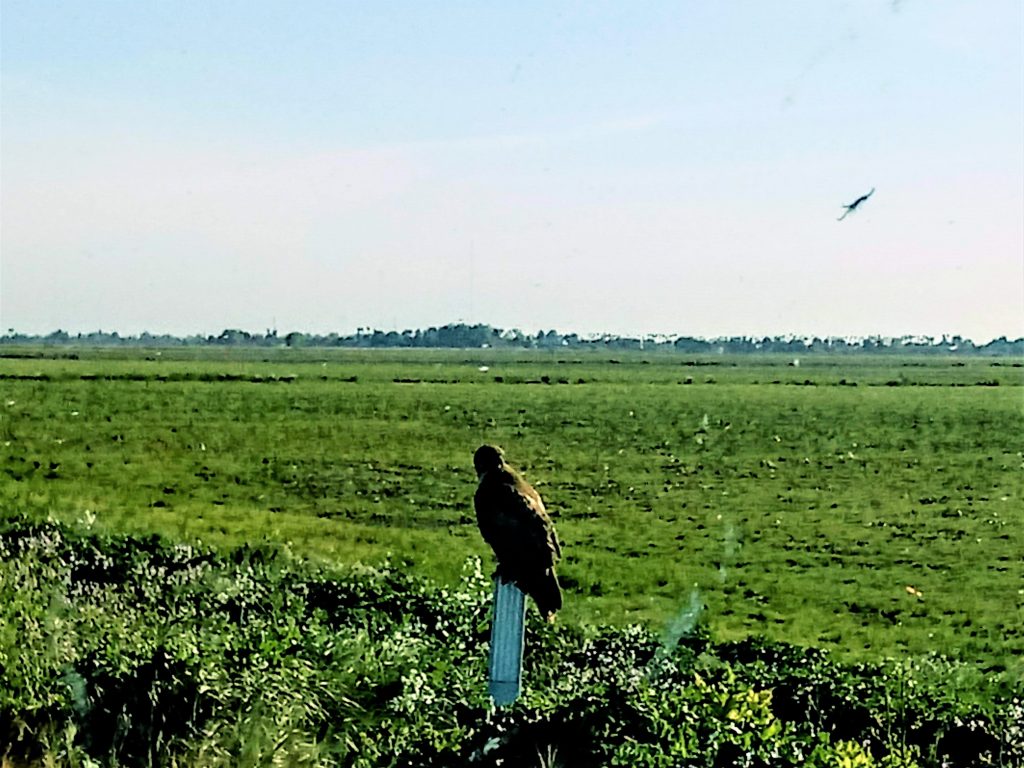 For perspective: This bird sits on a pole which is about three feet tall. I took the photo from inside my car which I had stopped just behind the pole and on the same side of the road. 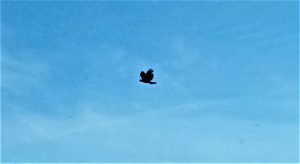 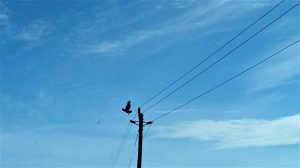 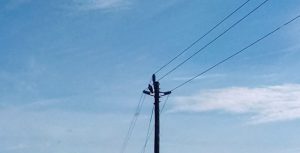 I took these photos this morning.  I don’t know what kind of bird this is.

I am going to attempt to imbed a five-second video of the above-appearing bird’s flight westward.  Please turn off your sound, as the radio plays in the background.