I met my second husband, Dennis, in a Yahoo Chat Room.  He sent a photograph of himself via e-mail a few weeks after we started talking.  I didn’t notice the wheelchair.  I asked at some point how tall he was, and he replied, “I’m an eleven-foot giant.”

I had ten years of marriage with him, and can attest to the truth of that assertion.  Regardless of our respective faults which led to divorce, I can without hesitation say that Dennis Ray Lisenby ran an Olympic marathon every blessed day of his life.

As I struggled to make my “bed” today, I remembered similar struggles undertaken by Dennis without complaint.

To put this in context:  I live in 213 square feet, counting two lofts.  I sleep on a platform that I had hoped would serve as a kind of couch during the day, providing guests with a comparatively comfortable place to sit, complete with “coffee table” on which to place the drinks that I would serve.

To accomplish this facade, I have to make my bed every morning, which  has never been my favorite task.  As my body becomes less flexible, I strain with increasing difficulty to reach the back edge of the cavernous sleeping area.  I drag a thousand pillows off the surface every night, and re-arrange them in the morning.   This morning I pulled everything off:  The nine decorative pillows; the three which I use for sleeping; the pile of “warming rags” as Dennis called them; the sheet; the soft cover; the cozy fleece from Jennie Taggart; and the fancy embroidered throw that my otherwise dubious real estate agent left on my porch after closing (I think of it as a peace offering).  All of it. The whole shebang.

I have so many layers because my legs cannot handle one heavy quilt or comforter.  Small pieces of fabric serve much better.  But getting them straightened confounds me.  My lily-white spastic hands barely close around the edges.  I lean into the space and lose my balance.  I let lose a few “fudges” and one or two actual unadulterated swear words.  At one point, I consider surrender.

Then I think about the eleven-foot giant getting around all day in a wheelchair.  To work forty or fifty hours each week; socializing at bars; down the walkways in Des Moines; across highways; in and out of vehicles; on airplanes.  I think, Okay, just make the damn bed, Corinne; and I keep going.

The final result falls within the acceptable zone.  I still haven’t convinced any visitors to sit on it, but eventually, I’ll figure that out.  The heavy board which covers the storage space under the back half could be put on lifters so that I can form an actual sofa.  Perhaps a piece of dense foam behind the pillows might create a couch effect.  In the meantime, at least the covers sit straight on the futon.  It doesn’t look as though I’ve just arisen at noon.

I’m not an eleven-foot giant, but I’m in training.  One of these days, I’ll earn the title.

It’s the twenty-fifth day of the fifty-first month of My Year Without Complaining.  Life continues. 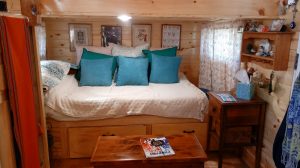 Here’s a link to one of the videos from Saturday’s March which particularly inspired me.  I tried to find the actual video URL rather than just a Facebook link, because a lot of my readers don’t use Facebook.  I wasn’t able to find it anywhere else. When I watched this clip of one man at the March for Our Lives, I thought, “There’s an eleven-foot giant if I ever saw one.”

4 thoughts on “A Salute to Eleven-Foot Giants”