I decided to be a writer before I started kindergarten, so somewhere between the ages of three and five.  My father taught me to read, one of the few gifts from him which I still cherish.  I had stopped walking just a few months after learning, beginning a hellish year of hospital visits, doctor examinations, and anguish for my mother.  At the end of it, my parents believed that I would never walk again.  My father thought I should have something to occupy my time.  He sat me in front of a newspaper and began the process of giving his three-year-old daughter an alternate life.

Much to everyone’s surprise, I somehow did get back on my feet.  But the tide had been turned.  I had words, and words would be my constant companion for the next sixty years.  Through tears, and trials; as a defense to teasing; when I felt ugly and undesired, I cowered behind notebooks, paperbacks, literature, and volumes of poetry.

In 2008, I started writing a blog called The Saturday Musings.  I posted weekly until December 2017, when I put that endeavor on hiatus.  I intended to edit a collection of the essays into a book.  Occasionally, I spend an hour or two with the ten Word files, each representing a select year of Musings.  I have gotten two years edited.  I have eight left to review.  I think 2020 will be the year.  Meanwhile, I have this blog; a blog for the community where I live, Park Delta Bay; and a new website, for the annual open house here, to draw words from my crowded mind.

Once in a while, someone says to me, You could be a real writer.  I smile, nod, and turn away.  I know what they mean.  I could write novels, pitch ideas, get an agent, have my work published by a traditional house, for money.  Then I would be “a real writer”.  Yeah, I suppose, I usually say, silently though, from behind a frozen mask which reveals nothing except my unwillingness to engage on the subject.   It’s possible that someone would like what I’ve written.  I admit that some of the Musings strike me as quite deftly crafted.  I expect that out of the 500-plus entries, at least a few dozen merit attention.  Perhaps only my lack of faith in myself prevents me from zipping the bunch on a flash drive and shipping it to a ruthless editor for critique.

Nonetheless, I feel as though I’m actually a writer.  Maybe an outside critic would disagree.  Until somebody tells me to stop, I’m going to keep laying down the sentences, occasionally illustrated with an amateur photo or a pithy quote.  I hear my grandmother’s voice, over and over, telling me to just keep putting my best foot forward.  Since my feet don’t work so well, my hands take over.  I lift my wrists, poise my fingers, and bring them down across the keyboard.  Despite my mother’s fears I did, eventually, learn to walk.  I cannot run, though.  My legs never regained their early strength.  My illness left me spastic and lame.  But when I write, I have no such limitations.  On the printed page, I can fly.

It’s the twenty-fourth day of the seventy-third month of My Year Without Complaining.  Life continues. 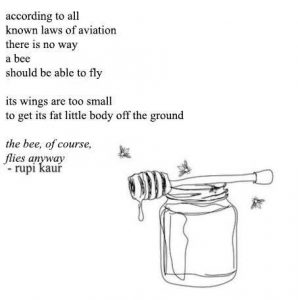