I recorded my first post in this blog on 28 December 2013.  I pledged to go “cold turkey” with complaining.  At the time, I lived in Brookside, an old neighborhood in Kansas City.  I took my inspiration from my mother-in-law, Joanna Mitchell MacLaughlin.  She had just died, and the priest who spoke at her service remarked on her uncomplaining nature.  At the time, I was married to her only son.  I had two step-children from that marriage; two from my first marriage; and a biological son, Patrick.

Five years later, as the sun sets on my fifth year of striving to forego complaint, I reflect on where I stood in that moment, the road which I have traveled, and the spot in the universe which I now occupy.

I live in a 12-acre RV / Tiny House park.  Ten other owner-occupied tiny homes, a host of RVs and trailers, and a handful of park models surround a broad expanse of meadow bisected by a stream of overflow from the San Joaquin river channeled into a natural creek bed.  Weeping willows rise above the rich earth.  Migrating geese, cranes, and other majestic fowl dot the sky.  A thousand small critters scurry underneath my house.  Cactus grow as large as cars in this pleasant climate.

I still have a warm, close relationship with Tshandra and Kim, my stepdaughters from my first marriage.  I’m divorced.  I never see or hear from my two beloved stepchildren from my most recent marriage.  I harbor no ill will to any of them.  I love all of them.  I mourn the loss of that relationship, just as I grieve the death of my favorite curmudgeon, my father-in-law Jabez MacLaughlin.

I closed my law practice, sold my house, and commissioned the construction of this tiny house on wheels which I named Angel’s Haven.  I came two thousand miles to start a new life.  I work in a law firm in Rio Vista, California, for a probate attorney who values my talents.  I’ve chosen not to get a California law license. I research, write, and draft estate planning documents.  I have my own little office.  I haven’t learned to use the inter-office phone system yet, but I did manage to program myself into the fancy-schmancy scanner.

Along the way, I’ve learned some valuable lessons.  I have not yet managed to go an entire year without complaining.  I don’t concede that I will not achieve that goal one day.  I have added some interim steps which I value as highly as the ultimate endgame to my personal quest.

Some cruel devices of life bludgeoned me into acknowledging that not everyone has my best interest in mind and heart.  I’m afraid to cite examples, because once in a while, someone recognizes themselves in even the most obliquely expressed anecdote.  I try to deny the accuracy of their suspicion, but I don’t fool them.  So allow me some generic observations here, for the sake of protecting the guilty.

I’ve learned not to let anyone know that you defended them to a good friend whom they cherish more than they cherish you.

I’ve learned that if I defend someone publicly, the person who attacked them will turn on me, and I accept that as a worthwhile risk.

I’ve learned that my title as the Energizer Bunny might have been justly earned, but even renewable batteries need down-time.

I’ve learned that I can combine resilience with relentlessness in any pursuit as long as my goals remain true to my values.

I’ve renewed my commitment to putting my best foot forward (thanks, Nana), to continuing to walk (thanks, Mom) and to living to be 103 and nagging my son every day of his life.  Okay, well, I’ve loosened my grip on that last bit, for which I feel certain my son would be relieved if it continues to be true.

I’ve learned that it is easier to refrain from complaint if one views the pursuit as an effort to live joyfully.

I’ve discovered that I do not need to defend my manner of expressing love.  I’ve accepted that others express their own love in different ways than I do.

I’ve learned that when someone decides that they do not like you, it reflects only their choice and not your intrinsic worth.

I’ve learned that being a bit easier on myself makes it also possible to be easier on others.

I consider these small steps, first steps.  I’ve learned enough in the last five years to wish that I had started sooner.

I remember the weeks when my doctor and I titrated me off painkillers for the first time in forty-five years as a wistful period at the very start of this adventure.  I knew that being off narcotics would open me to experiences which I had been able to avoid.  I would feel again, all the pain, all the aches, all the bone-crunching spasms — but also the fear, the anger, and the loss that life brought to me.

Getting off narcotics also restored my ability to feel joy.  It took longer, because I had so many years of repression for which to compensate.  Bile rises higher, harder, and faster than beauty.  But all the horrible stuff that I had shoved into my celestial gut eventually spewed upon the ground.  I raked through it, examining the disgorged memories.  I extracted bits of the grim refuse, turning it this way and that, examining its formidable contours.  I dragged a bag from the cupboard and filled it with all those dark images, securing the mess with a sturdy zip tie.  I hauled it to the curb on Bulk Trash Day.  I watched a grinning sanitation engineer sling the filth into the back of his truck and drive away.

It’s the thirtieth day of the sixtieth month of My Year Without Complaining.  Life continues. 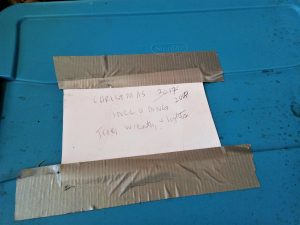 Every year since my son’s 1991 birth, I’ve boxed the Christmas decor and labeled it with the date. I only kept one box-full,. I started a new label. 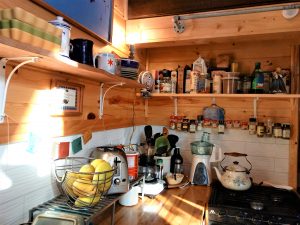 In a tiny house, clutter can overwhelm. 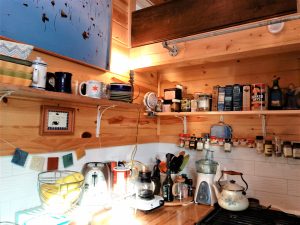 I straightened both shelves, though I didn’t take a “before” picture before I did the left-hand side. 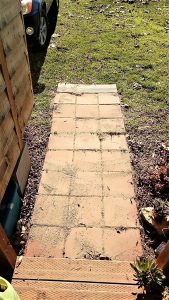 My neighbor’s son extended my year-old path by nine squares today. Next year, I’ll try for another nine.

One thought on “My First Steps”