A refrain rambled through my head all day.  Sparked by a message from someone whom I adore in Kansas City, Cindy Cieplik, the positive affirmation chugged its way around a loop typically shrouded in billowing smoke from an antiquated coal train.  I can always count on Cindy to spread joy.

I worked half of the day, hammering at injunctions and letters, fighting a corrupted Outlook file that won’t be fixed until next week.  A fly had followed me into the suite.  Other than it and me, no other sentient being stirred.  I worked alone today.  A little after one, I called it quits and headed to the Loop, with a lazy stop at Robin’s Nest, the local thrift store.

All the while, the pleasant refrain inspired by Cindy’s early morning post drifted through my brain.

As I turned onto Brannan Island Road, a white flutter halted me. I watched as an egret gazed over the San Joaquin.  It turned and stepped in front of me, skittering back when a car came from the other direction.  I held my breath, filming as he lifted the spindles of its legs to forge forward.  I had to drop the phone at the tap of a vehicle’s horn.  The noise startled the bird and it lifted its wings, rising to the tender  air of winter and out over the river.

I don’t know why he crossed the road in the first place.  But I remain humbled by the chance to have watched it happen.

It’s the seventh day of the sixtieth month of My Year Without Complaining.  Life continues. 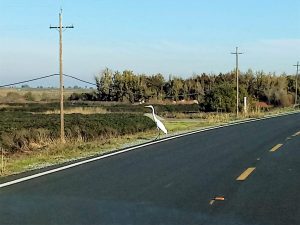 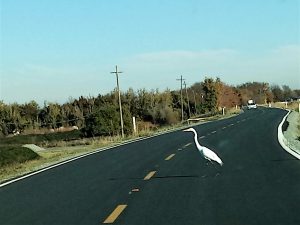 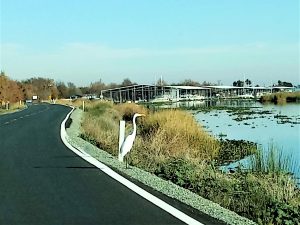