Every once in a while, something scrolls past in social media which resonates.  It reaches through my soul and grabs the essence of my being.  With a jolt, I wake to a new realization, born from the inside, manifesting itself outward.  In that moment, I feel beyond validated, wildly more than refreshed.  I feel redeemed.

Then again:  Usually the flashes of video offer crass humor or cute animal tales which barely grasp a second of my attention.  But still:  They get me looking.  Once in a while, the next entry draws me into its magic.

Tonight my neighbor Laurie came to dinner.  Over home-cooked soup and white wine, she told me about her new adventure, the week she spent with her grandchildren, and seeing her son for the first time in two years.  After she left, I read a few emails and scrolled through Facebook.  I saw an irate exchange between one of my Kansas City friends and a disgruntled right-leaning Trump supporter.  I read a blast directed at me by someone whom I value for posting a joke that he considered out of place.  I sighed; so much pain in the world.  So much indignation.

Then I had a moment where I ignored one video but start looking at the next, and the next, and the next til all of a sudden BAM.  Something got to me.  Not my usual cup of tea but I could not resist.   I played the song over and over.  I went upstairs and opened YouTube to hear it through a better speaker.

Laurie and I talked of signs this evening, of manifesting our intentions.  I must have been more awake than usual because this time, the Universe did not need to hit me on my pointed head.  Message received.  I’m still smiling.

It’s the fifth day of the sixtieth month of My Year Without Complaining.  Life continues. 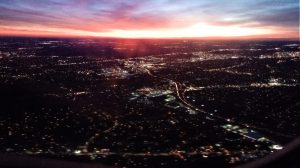 YOU WILL BE FOUND.

One thought on “You Will Be Found”