My great-grandmother saved my life yesterday.

Though she lies in a grave in St. Louis, more than two thousand miles from me, Corinne Hahn Hayes intervened at an opportune moment.  As the house shook from an off-kilter washer, a photograph of my great-grandmother leaped from a bookshelf.  I heard the clatter and went upstairs to see if anything had broken.  At that moment, a wine bottle vibrated out of its rack and crashed to the floor adjacent to the chair on which I had just been sitting.

I don’t normally sit in that chair located at the spot.  I had a video playing on my tablet as I did some chair yoga.  I sat the tablet on the kitchen counter so it would be at eye-level.  That unusual move put me in front of the washing machine, above which the wine rack sat.

The shelves of my home hold angel statues, vases, and brick-a-brack.  Many items sit far closer to the LG washer/dryer combo than my great-grandmother’s photograph.  None of those things vibrated off their shelves in that moment except for Corinne’s photograph.

I don’t know how much more clear her message could have been.  Get up, come here, don’t stay there, she commanded.  I never knew her.  I have several photographs of her in addition to the one which fell.  She died in 1944, before my parents met.  In later years, her face assumed the stern tenderness of a widowed woman in her time.  My face bears her stamp in some regards — its shape, I think, and maybe the set of my eyes.  I imagine her gaze on me.  Perhaps she glanced down from the writing loft and sensed the danger.

My parents originally named me “Bridget Kathleen”, according to my father.  They had wrestled with a difference of view on what to call their sixth child.  She favored “Mary Kathleen”, while he insisted on “Bridget Corinne”.  Of the four, only “Corinne” had family significance.  After the first compromise, my father remained dissatisfied.  He described scribbling the permutations of the name on a paper napkin at the bar in Jennings where he drank.  He decided that “Mary Corinne” looked better with “Corley” than the combination which they had given me.  He drove to the hospital and persuaded a clerk to re-write the paperwork.  He told my mother after the fact.  He said it had been a matter of days.  She rolled her eyes at that; she once said, “Yes, thirty of them.”  Either way, I seem to have come full circle.  His decision might be responsible for invoking the protection of a guardian angel named Corinne.   Now she watches over me, as I make a new life in a tiny house on wheels called “Angel’s Haven”, in the California Delta, far away from anywhere that my great-grandmother called home.

It’s the seventeenth day of the fifty-ninth month of My Year Without Complaining.  Life continues. 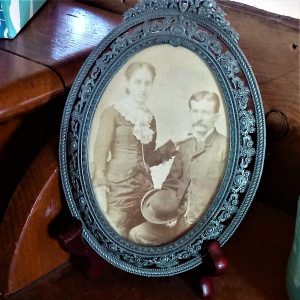