I could have, but creating an entry without complaining might have strained even my dedication.  I spent the day managing issues not of my making.  Problems caused by others’ failures, remissions, or omissions took me to near-breaking point, after I dropped my son at the Pittsburg BART stop for the first of his many transit legs to Evanston.

One potential aggravation after another hammered at my resolve not to complain.  I gritted my teeth and slogged forward.  By nightfall, my first night alone in Angel’s Haven, I had neared the point of regretting this entire daring move to NORCAL.

The alarm rang at 5:15 this morning.  I asked the Google lady to tell me how long my trek to Palo Alto would take.  She obliged:  A staggering two hours and thirty minutes.  I put myself at warp speed and bludgeoned my way out of Park Delta Bay as the dash clock hit 9:00 a.m. CST.  Note to self:  Change clock in the RAV4.

I sailed over the 160 bridge into a fog bank, frightening, eerie, beautiful.  Just beyond Antioch on Highway 4, the sun dispersed the lingering wafts of chill.  I shrugged out of my jacket and pressed forward.  I must have pushed the speed limit, because the GPS lady upgraded my time to one hour, fifty minutes; and as I started around the edge of South Bay, she twittered, You are on the fastest route and the route is clear.  You should reach your destination by 8:43.

I pulled into the Quarry Road parking lot of the Neuro-Science Building at Stanford Medical Center exactly eleven minutes before my 9:00 a.m. appointment.  The dashboard winked from its Missouri conclave.  If I believed my car, I had missed my treatment by two hours.  I winked back and strolled into the lobby.

The guy at the desk tried to discourage me from having a happy new year by telling me that I had to wait behind a far pillar until he logged into his computer.  I stood my ground to the right of him, near the door by which I had entered.  He paid back my rebellion by failing to properly log my arrival into the system, causing a mild twitter of confusion when I reached the second floor.  But we overcame.

I like my neurologist at Stanford.  Come to that, I like nearly everybody there, with the possible exception of the guy in the lobby whom I had never seen before today.  Over in the Hoover Pavilion, the concierge remembers my name from visit to visit.  He sends me to the ID folks with a grin and a compliment about whatever hat I’ve worn that day.  He could teach this morning’s check-in dude a lot.

But Dr. Lopez’s people more than compensated.  On account of his being stuck over in an early surgery, they got me a cup of coffee from their pot and settled me in an easy chair until he could see me.  The man himself heaped good cheer on everyone as he entered the area.  I know a little of his story. He and his family immigrated many years ago, legally, poor and hopeful.  Now he volunteers his expertise world-round.  He told me once that his friends scoff.  They say, “Jaime, you make so much money, you can work as little or as much as you want, why do you give away your time and talent?”  He told me his reply:  “I make so much money, I can work as little or as much as I want, why NOT give away my time and talent?”

Stand-up guy.  He monitors surgeries all over the world, helping insure the patients’ safe matriculation from twilight to dawn.

He kept me laughing as he manipulated the tiniest possible muscles in my lower legs, aiming poison, hoping to kill just a little of the spasticity which causes me to topple.  Afterwards, we talked about increasing my visits now that I’m a Delta dweller.  We went over my chart.  Then he and his nurse walked me out, him talking about the speech he gave the day after my last visit.  He had re-scheduled me to after-hours because of that speech. He’d rehearsed it with me as he gave my treatment with no assistant since they had all gone home.  I’d asked a few questions, and he’d made revisions, he told me now, on account of the questions that I had posed.

I don’t know if it’s true or not, but I felt good knowing that maybe I had inspired him.

Afterwards, I went to the music store where I had bought Patrick’s banjo.  They helped me box it for shipping, and then I went next door to FedEx.  A lady smaller than my package hauled it from the back of the car and into the shop, astonishing and shaming me at the same time.  She got it labeled and on its way; and then, I headed east to Berkeley and a little bit of home.

The views on the path to the top of the mountain where my friend Kimberley Kellogg has taken temporary quarters astonished me,  High above East Bay, overlooking its span, Grizzly Peak Road — that was its name, I think — wound higher and higher.  When I reached the upper perimeter and pulled to the side of the road, Kimberley slipped into the passenger seat.  Suddenly yesterday’s minor aggravations faded.  The cadence of her voice said home — Missouri; Kansas City; and welcome.

We’re a couple of Midwest-ex-pats, me and Kimberley.  Our souls yearned for the Pacific, with its welcoming song and soothing air.  Now we’ve both made it here, a suitcase at a time for her; a tiny-house-and-RAV4-full for myself.  We found a Korean restaurant which offered both GF and vegetarian dishes.  As we always do, we started the conversation where we last ended it, without a pause, without a breath, without even an acknowledgment or concern about the weeks in between our meetings.  It’s what we do.  You can’t estrange us from each other.

A few hours later, I dropped her at the door of her temporary home-away-from-home.  I asked my GPS lady to take me to Park Delta Bay.  I must have told her to avoid highways, because she did: And I thought, a half hour later, that my friend Kimberley lives in heaven.

I didn’t find a space to park and take a photo of Inspiration Point.  I cruised through the turn-off with my mouth open.  A gaggle of retirees laughed, looking into my car.  One of them waved her arm in the direction of the astonishing vista.  I nodded.  She touched her cheek and I realized that tears had begun to fall from my own eyes.

My friend Kimberley takes me to the best places, even if she hadn’t planned this stunning detour for me.

I got to the other side of the mountain before I persuaded my GPS lady that I didn’t mind highways or toll roads.  I found my way back to 4-East, and then to 160 just as the sun eased itself behind Mount Diablo.  Once on Highway 12, I counted Report Drunk Drivers signs and turned on Jackson Slough Road after the second such sign, thinking, for the hundredth time, that anybody who drives drunk on a winding levee road in the California Delta needs more therapy than they’ll get in the county drunk tank.

I parked my car in the space in front of Angel’s Haven right after the last meager rays of the setting sun had kissed the river.  I sat in the car, listening to the engine;’s hum fade away, wondering whether yesterday’s problems had resolved themselves.  I know that they haven’t.  They await the judicious application of all the non-violent communication which I can muster.  Tomorrow.  Tonight I will have a cup of tea, return personal phone calls, and download a book on Kindle — something mindless, like an old Lawrence Block.  That’s about my speed tonight.  Herbal tea from a client’s mother in China, and a 1950s vintage police procedural.  I’ll put on my slippers, and turn out the overhead light, and fall asleep in Cherie Meyer’s husband’s old rocking chair.  After a while, I will shake myself awake and crawl into bed, smiling, blissfully unaware of whatever calamity might come with the dawn.

It’s the twenty-seventh day of the forty-eighth month of My Year Without Complaining.  With a special greeting to my dearest Penny Thieme, whose birthday it is today, I bid you goodnight, from Park Delta Bay, where a California dreamer will soon lay herself down.  Life continues. 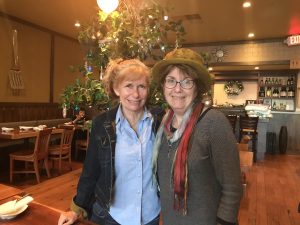 Kimberley Kellogg and myself 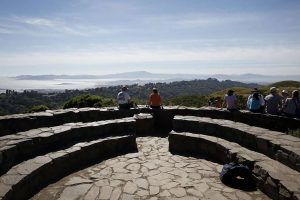