On the strength of my having admired her daughter out on the pavement, a woman from Korea asked me if I knew who would come to allow her and her husband to register for the hostel.

I assumed the air of a regular and explained that I had seen Michael, the manager, walk down to the parking lot.  Presumably he would shortly return.

We stood together in the little lobby.  She said, Where is your husband, her own being outside of the building watching their child try to reach an ice plant, with its prickly fronds and sturdy pink flowers.  I replied that I was traveling alone.

Alone, she repeated, with a slightly puzzled air.  She contemplated this for a moment.  Do you have fun traveling alone?  She looked expectant.  I gathered she wanted a yes or a no.  But I could not think of an answer to give her.  I shrugged, and finally replied, I’ve never thought of it in just those terms.  It is how I travel.  Then she started chattering, whether from ease or discomfort I could not say.

I tried to follow her story but got distracted by the answer left unfound.  She came to the end of it and said, Do you think the manager will come soon? And I told her that yes, I believed it would be just a minute or two now.  I found myself praying for Michael’s immediate arrival.

And then he walked through the door, with his weathered face, his lean body, and his short blonde hair beneath the same cap that he had worn last September.  He called me by name and embraced me before disappearing through a door.  The wooden barriers to the check-in window swung open and Michael reappeared, just as brightly, just as warmly, as I remember him from every visit which I’ve made to this magical place.

While we waited for him to activate his computer, the woman told me her name, and her husband’s name, and the name of the adorable little girl.  Hadassah, she said.  It’s Hebrew, and was used by Esther, who had to disguise herself.  She’s half Korean, because of me.  Then Michael held out the registration form, and the woman said, Shouldn’t my husband be the one to sign this? and Michael said it did not matter to him.  But the woman turned and looked up at her husband, who stood a full foot taller than she.  Shouldn’t you sign that, she asked again, and he shrugged a little but came forward.

The husband held the little girl high above the counter so he could sign the ticket.  The child pushed her face over his shoulder and examined me with her widest eyes.  She did not smile at first, so I made a little noise like a bird and she giggled.

In a few minutes, I took my turn.  We had a little kerfuffle about the reservation but soon Michael fixed the problem and I headed to my room with a couple of bags of food and the faithful Barcelona bag.  I noticed the Korean woman and her American husband carrying suitcases into Dolphin house, where I prefer to stay but where, presumably because of the kerfuffle, they had been put in my stead.

However the private room in Seal did quite well, despite the flipped layout of the building.  I settled my belongings and walked back outside to climb the hill and sit on the bench outside the old cottage. I gazed out at the sea, following it as far as the horizon.  When I had my fill for the moment at least, I leaned back and closed my eyes.  Faintly, from below the small hill on which I sat, I heard the cry of the seagulls.

I watched the road from the parking lot for a while.  Tourists still walked to and fro, snapping pictures and pointing.  Couples, mostly; and the occasional family.  An old man trudged along, heavy-footed, hands shoved into his pockets.  A woman wearing a green ball cap walked by with a Border collie.  Children craned their necks to try to spy the top of the lighthouse, no doubt imagining its winking eye and the boats which it guided safely around the rocks.  I fingered the Pigeon Point Lighthouse commemorative pin on my lapel.  Five dollars in the tin and sign the guest book, please.

I closed my eyes again.  The sun warmed my face.  I asked myself: Is it fun traveling alone?

I still had no answer.

It’s the seventeenth day of the thirty-ninth month of My Year Without Complaining.  Life continues. 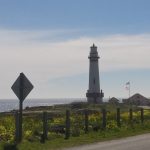 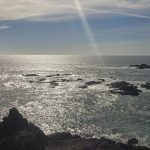 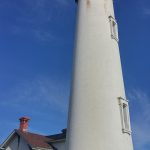 2 thoughts on “Questions less vast than the sea”