The last time I saw Bo Flasschoen, he wound my scarf around his neck and introduced me as his Aunt Corinne.  I had not worn that title for nearly thirty years, but Bo had never been one to trifle with technicalities.

It was at Jenny Rosen’s birthday party in 2017.  I came with Jenny, but wandered around the crowded private party tent feeling left out, old, and useless.  Then Bo came over and hugged me.  He took my scarf and dragged me around to meet people — young people, people that he and Jenny and Micah Spivey had known for years.  He let me get him a drink and refused an offer of food.  He sat beside me for an hour or so, and talked of his life as though he had read about some boy in the newspaper.  His voice barely rose above a whisper, but somehow I could hear him — not over the music, but beneath it and entwined with it.

Later in the evening, he offered to walk me to my car so I could get home before the party got wild.  For some reason, he decided that I needed protecting.  He borrowed a baseball bat and told me that I would be safe; that he’d take care of anyone who threatened me in the dark parking lot.  He swaggered around the bar, taking practice swings and startling more than a few tipsy souls.

Before we left, we sat in silence for a while.  I watched Bo as his eyes steadily moved around the room.  I could not tell if he found whatever or whomever he sought.  He caught me studying his face and flashed a huge grin.   I meant to ask, but something in his manner kept me quiet.

The next day, Bo messaged me to ask for legal advice.  I tried to help him.  We exchanged a few texts about a troubling situation.  I never found out whether he overcame the difficulties.  I never spoke with him again.  I never saw him again.

I do not think my friend Sandy Thomas Dixon has ever called me on the telephone, and certainly not since I moved to California.  When I heard her voice today, I knew the news would be about as terrible as news can ever get.  And it was:  My dear friend Alan White had lost his son, Bo.  He died last evening.  Sandy did not know much more.  I sank into a chair.  My body shook.  Grief gripped me; sobs coursed through my chest.  Yet I knew, as certainly as I felt the hard wood beneath me and the cold chill which crept into my heart, that I could never begin to imagine what Alan and Bo’s mother, Janine, must feel.

I called my own son, Patrick.  He remembers Bo as the kind, gentle soul who first taught him to play a guitar more than twenty years ago.  That extraordinary teacher came to me and suggested that I let Patrick set his own pace.  A few years later, I came home from work to hear a flood of rhythmic chords flowing down from Patrick’s room.  Bo had been right, of course; Patrick came to the guitar when he was ready.

Bo himself possessed an extraordinary gift.  Like his father, perhaps even more so, Bo melded with his instrument.  Whether that synergy stood between Bo and the rest of the world, I cannot say.  But that world is enormously poorer for the loss of him — the loss of his quiet, indomitable spirit and his passionate, impeccable artistry.

I mourn for Alan, and for Janine; and for their daughter Sarah.  I mourn for Bo’s faithful friends and for those who, like me, drew warmth from the quiet light which he radiated.   My grief hovers on the periphery of theirs.  But nonetheless, I come here to honor the passing of this precious son; and to hold aloft that small portion of his life which I was graced to share.   A wondrous being such as Bo Flasschoen should not be let to completely fade away.  We can barely stand such loss of him as we must inevitably endure.

It’s the eighteenth day of the eighty-sixth month of My Year Without Complaining.  Life continues. 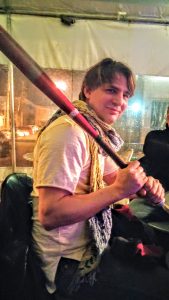 Brokedown Palace, by the Grateful Dead; words and music by Robert Hunter and Jerry Garcia

3 thoughts on “In Memory of A Son”