Those who have only recently discovered this blog might not be aware of its origins and purpose.  A little background should prepare you for this post.  If you are not new, and recall why and when I began #myyearwithoutcomplaining, skim downward.

In October of 2013, my mother-in-law Joanna MacLaughlin died after a six-month descent into the murky quagmire of dementia.  I spent those months as part of a group of family members who provided care and companionship.  Her gentle decline moved me in ways which I had not experienced since my own mother’s last illness nearly thirty years prior.

At her service, the priest honored me by reading a blog post which I had written about Joanna.  But he also shared his experiences with her, Among other observations, he remarked that he had never heard her complain.  His comments resonated with me.  I resolved to try to get through an entire calendar year without complaining.  Already an avid blogger, I intended to start a new blog, one in which I reported on my efforts.  I wanted to be accountable but also to encourage others to make the effort.

I started on 01 January 2014.  But 2014 had other plans for me.  Gut punch after gut punch challenged my resolve.  By the close of that awful, lost time of my life, I realized that I had to keep trudging forward.  My daily public journal of my endeavors became these chronicles of my #journeytojoy.  Eventually, I sold my house, built Angel’s Haven, phased out my law practice, and moved to Northern California.  Here, I have found so much beauty that even in the saddest of times, I feel myself drawn to peacefulness.

But I have never lost sight of my original goal:  To make it through a calendar year without complaining.  Nor have I attained it.  Along the way, I have learned that complaint takes a myriad of forms, verbal and nonverbal.  I have rooted out my nastiness and striven to embrace positivity.  I have not always succeeded.  I have never stopped trying.

More than a year ago, I visited my son in Chicago.  I had been to Kansas City and gotten some belongings from storage that I wanted to ship to myself.  He left me at a UPS and went to another store.  I assume he thought he could let his 63-year-old mother make a simple transaction without his 27-year-old guidance.  James James Morrison Morrison Weatherby George Dupree would have simply shaken his head, taken my hand, and done the deal for me.  I know I read that poem to my son during his childhood, probably a hundred times!

Like most adult survivors of childhood violence, I harbor strange, unhealed wounds.  I pull the bandages off from time to time and apply clean salve.  I keep them from festering.  Occasionally, I add a little natural antiseptic:  A cup of tea on my porch; a half-hour reading Timothy Pettet or David Arnold Hughes.  If all else fails, I throw my cooler and my bag from Guatemala in the back of my Toyota and head for the coast.  I sit on the bluff wrapped in a shawl and listen to the song of my Pacific.

In that UPS, I strained to keep a civil tone as the young man told me first, the price to pack and ship the quilt and other items would be $50.00.  As I handed him my debit card, he announced that he had been mistaken, the total came to  $75.00.  I had been unemployed all year and living off savings.  Penny-pinching had not yet taken hold but I had to be careful if I didn’t get a job soon.  So I said, How did it go from fifty to seventy-five, and he replied, “Oh, I meant, $150.00,” and I drew a sharp breath.

Now one of my curses is that I roll through every unpleasant encounter with the unshakable conviction that I am to blame for any difficulties.  The courses and workshops which I took to be a guardian ad litem taught me how this happens to children of chaotic households.  My intellectual understanding does not quell that first instinct to apologize.  I stayed silent.  I thought over the tripling of the cost.  I imagined my son shaking his head and sighing, that he couldn’t leave me alone for ten minutes without my having an argument or bursting into tears.

I picked up the unwieldy stack of everything that I had wanted to ship and told the clerk that I could not afford the price he now sought to extract. I asked him if he could hold the door open for me.  He refused.  I staggered away from the counter.  Unfortunately, one side effect of having a neurospastic gait is that it worsens under stress or strain, physical or emotional.  Moreover, I can’t open a door and hold an armload of bulky objects.  I asked him again; he refused again.  He didn’t move from behind the register, even though I was the only customer and he, one of two employees.

Eventually, I did start to cry; and he did relent and open the door, just as I leaned against the jam and pushed it with my foot.  The door suddenly swung away from where I leaned. I fell into the empty space.  My burden shifted.  A dish that my son had made in kindergarten fell to the ground and shattered on the sidewalk just as Patrick approached.

I still feel absolutely terrible about that encounter.  I tried reaching out to UPS but the clerk told another story; that he had made a simple error and I had been unreasonably upset.  My word against his, and me convinced that somehow, someway, it had in fact, been my fault.

Nearly two years have gone by since then.  I still cringe; still run the dialogue in my mind and try to write a better ending than my salty tears and my son’s worried look, the pall over our lunch.  I tell myself a thousand times, “don’t sweat the petty stuff”. but mostly I just wish that I did not feel so bad whenever I ask someone to help me and they resent my need, or fear treading where angels have abandoned.  I keep my head down.  I deem myself unfit for polite company.  I ask little.  I give as much as I can, hoping that any bad karma will resolve itself on balance.

Last week, I tried to buy some fresh eggs at a local market.  Because of social distancing, the store has rearranged its layout and built a barrier in front of its cash register.  I could not get my groceries under the shield. I strained to reach the ticket to sign.  Because I had been having a difficult day with my physical issues, I lost my balance and fell against the counter.  The clerk made no move to help.  She just stood, watching, silent.  I might as well have been invisible.

I went home and unpacked my groceries.  I thought about that UPS guy, two years ago in Chicago.  I asked myself, are you just unlucky?  Do you have a sign on your forehead that says, “I cry easily, go ahead and be rude to me? ”  Am I imagining things?  Is this just how humans behave, and I see it as unacceptable?  Did I do something to deserve this?  Am I making a mountain out of a mole hill?  Is it my fault?

Crazy thoughts like these plague me.  They have, all of my life.  Sometimes about these seemingly insignificant events, but often about cataclysmic happenings, like marriage, sickness, my clients’ cases, and the geo-political crises of our times.  Perhaps my life holds too many long silences.  Along with war, poverty, the plight of immigrants, and every deadline that has ever loomed in front of me, I worry about each small encounter.  I strain to treat people with enough courtesy that they will feel better about themselves.  I examine everything I do and say.  I scrutinize my tone, my phrasing, and my expression.  I analyze my motivations.  I just want to do the right thing. I just want people to feel good.

I also want to be treated with courtesy.   I can’t think of myself as a victim, because the indelible lesson of my childhood screams my complicity in my own demise.  My Catholic upbringing drives me to perfection.  But wait, I tell myself.  Is it too much to ask them to adjust their layout in the smallest way, so that you don’t fall trying to pay for what you need?

Anyone who experiences anxiety will recognize this constant battle.  Marshall Rosenberg would suggest that I find a way to make a request of the store, leaving them free to decline.  I decided to try.  Maybe others would benefit from my effort.

I messaged the store, mildly and calmly explaining what I had experienced.  I did not make any inflammatory statements about the clerk.  I kept it factual, and simple.  I explained how the new set-up challenged me. I realize the clerk herself wanted to practice physical distancing.  I tried to keep these unusual times in mind.  The store responded, thanking me for letting them know.  To me, the exchange seemed satisfactory.

Yesterday, I got a message that they had received a supply of the local eggs which I buy there.  They wanted to gift me with a dozen, to thank me for reaching out to them.  I could not believe their kindness.  I stopped on the way home from work today.  I got a few items which I can only buy there — local fermented veggies, Washington aspargus, my favorite gluten-free snackage.  I gave my name to the lady at the counter, and she came out from the back with a nicely wrapped package.  When I got home and opened it, I found a dozen local eggs and a lovely candle.  I put the candle on my kitchen shelf.  I made myself an omelet, and sat at my pretty table, thinking that maybe, just maybe, life might be worth living after all.

It’s the fourteenth day of the seventy-seventh month of My Year Without Complaining.  Life continues. 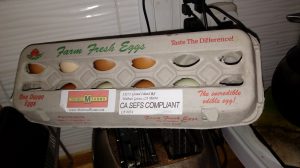 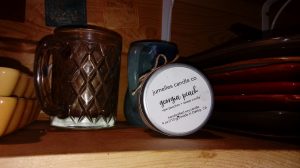 Three gone, because I made an omelet.  Stay safe everyone. Choose joy.