Six years ago, I decided to attempt to matriculate through 365 days without uttering one word of complaint.  I failed miserably, so I kept the effort going. i continued being accountable for the effort by blogging.  At the end of year four, I suspended my other, weekly blog; closed my law office and art space; sold my house; took possession of a newly constructed tiny house on wheels; and headed west.

For the last two  years, I have struggled with the new life that I seemed to eagerly embrace.  What was I? Not a California girl, no longer a Missourian.  Not married, uncomfortably divorced.  With my one child grown and my siblings all engrossed in their own progeny and careers, not really a family person.

In 2019, I have watched an astounding number of videos on YouTube in which people shared stories of their own journeys to self-acceptance.  These ranged from college students struggling with body positivity to fitness coaches to book reviewers to one young woman in Scotland who has an extraordinary vocabulary and a PhD in literature based on her dissertation on Joyce’s Ulysses.  That last vlogger speaks in stark terms about recovering from anorexia and expounds upon books of which I have never heard and doubt that I have sufficient intelligence to understand.  She also did an entire video on not giving any more F*cks, in which she managed to bleep that word all but one of the dozen or so times in which she used it.

One of the exercises in which I engaged in 2019 involved listing all the criticisms that have been leveled at me in the past decade and examining them for accuracy.  Believe me when I tell you that doing so humbled me beyond expectation.  Assuming that every insult contains at least a nugget of truth forced me to ferret through the exaggeration to find the uncannily perceptive accuracy.  If those bits had been pebbles, I could have paved the muddy path from my car to my tiny house and walked with ease for the better part of a rainy winter.

I learned from that endeavor.  My coldest suspicions about myself found both confirmation and refutation.  In short, I concluded, for the hundredth time, that I have attained neither perfection nor utter failure.  I hover in the region of midway between the two.  With a long way yet to traverse to my best self, I’ve still moved forward, if only a click or three.

I have a list of goals that I did not meet in 2019, along with, yes, the unattained principal objective of going a year without complaining.  I’ve managed to anger a few people;  and I’ve disappointed some whom I dearly love.  That last failure hurts the most, a self-inflicted wound made bloodier because I could not resist pulling the dagger from my heart.  But the salve of forgiveness brings healing; and I remain hopeful that I will earn my bandages by and by.

It’s already 2020 in Asia, in Russia, and across the Atlantic.  Soon, the earth’s orbit will close the decade even here at the edge of the nation.  I will wash my dinner dishes and hang the towel on the stove.  The porch light will be extinguished and the heat turned to a lower temperature.  I will gaze around the 200 square feet of my home, contemplating the changes that the next week will bring as I undertake another declutter and a few house modifications.  Tomorrow gives me an unbroken day in which to set the tone for the three-hundred and sixty-four days to follow, during which I will try, with every ounce of my energy, not to utter a single disparaging word.  Happy New Year, everyone.  May the coming months hold peace, prosperity, glory, love, and grandeur for you all.

It’s the thirty-first day of the seventy-second month of My Year Without Complaining.  Life continues. 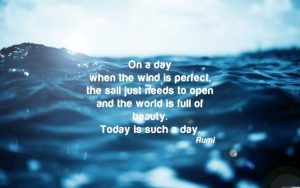