In my sister Ann’s house, cookies and tradition sit plentifully on the wooden shelves.  The children have grown but they return for holiday dinners and long walks on Sunday.  Everyone flashes genuine smiles beneath dancing eyes.  They speak in cheerful tones and write thank-you notes, which my sister says are the last bastion of a civilized society.

When my sister learned that I would be alone for Christmas, she bought a plane ticket with her airline miles and planned my visit.  I slept in the little bedroom off the dining room under a hand-made quilt, with her childhood afghan in pristine condition folded at the foot of the bed.  Glass globes hung from the dining room light.  Fairy lights twinkled in the schefflera plants on either side of the bay window.

My sister joined the army before I finished elementary school.  With her nursing degree, she spent a year in Korea at a hospital caring for wounded soldiers coming from Vietnam.  She met her husband in the army.  When I asked Ann and Bill how long they had been married, Bill said, “I have no idea,” simultaneous with Ann’s “too damn long”.  I didn’t believe either of them.  I don’t know what their forty-three years together have brought them; but I heard no grumbling, no disagreements, no painful sighs.  The silences between them seemed companionable.

In my sister’s house, yarn gets spun, tapestries woven, and bread kneaded.  I’ve always called my sister Ann “the perfect one”.  She made her oldest son’s blue-jeans herself, for goodness sake, at least in his  tender years.  With double seams, no less; just like in the store.  Ann remains connected  to each of our siblings, while the rest of us fall into factions with lingering and petty disputes driving wedges between us.

I wonder what would have happened if Ann had stayed at home longer, into my high school years.  Would I have struggled less?  Would she have suffered more?  Would her marriage have lasted as long; could her children have grown into such  happy young men?  With her influence stretching into my college years, might I have learned a few lessons sooner than I clearly have?  I cannot say.  I came away from Christmas at my sister’s house with two balls of yarn, a pair of borrowed socks, and the lingering feeling that I have missed so much these last decades, when we lived just a few hours away from each other.  I rarely saw her. Even less frequently did I turn to her for comfort or counsel.  I did not give my son the benefit of her wisdom.

I spent the better part of this afternoon making a little neck  wrap from the yarn which my sister gave me.  I hope I did her justice.

It’s the twenty-eighth day of the seventy-second month of My Year Without Complaining.  Life continues. 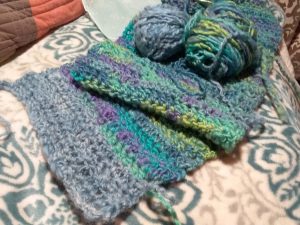 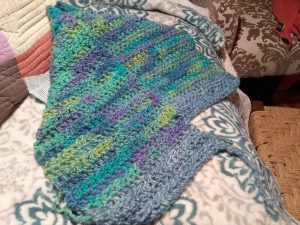 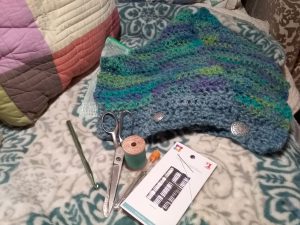 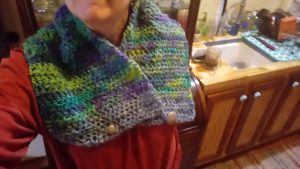