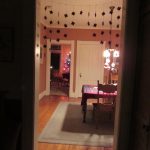 I came back to Missouri from Arkansas in late December of 1990, two months pregnant and determined to reconnect with family for Christmas.  My close friends in Kansas City gave me safe harbor — a bed for as long as I wanted it, offers of  dinner, presents, comfort.  But I craved something indefinable which they could not provide, a certain meaning stamped on common DNA.

I had intended to drive to St. Louis on Christmas Eve but a snow storm blanketed the stretch of highway between the two cities.  Desperate, I phoned my brother Mark.  In his measured voice, he suggested the train.  He offered to meet me at the station and promised their guest room for as long as I wished to stay.  I did not refuse; in fact, the eagerness with which I accepted must have surprised him.  We had never been close.

At Union Station, I struggled with my small bag and my  bundle of presents.  But angels stepped forward.  A gloved hand came under one elbow.  An arm entwined my shoulders.  Someone hoisted my belongings to the corridor above me.  Another person practically lifted me from the packed snow through the frigid air, into the car.  All the while, I murmured meager words of gratitude, barely discernible over the heavy noises of the train as the crew readied the long train for departure.

I have always enjoyed the space of time and sense of isolation of travel by rail.  Nothing takes place while you huddle against the glass and stare at passing farmhouses.  Though modern times have brought USB ports and hand-held electronics for distraction, 30 years ago, one could still sink into blissful oblivion.

The eternal clanging lulled me into a drowsy daze.  My hand sought the rounded curve of my belly, where I thought, just thought, I could feel a newness of texture even beneath my heavy garments.  In that space of time between the last call for boarding and the cry of entry into my station, the life within me unfolded.  Birth, babbling, steps, cries, laughter, hugs, songs;  an endless delightful film unfurling itself in my sleepy brain.

I don’t remember that Christmas celebration.  Except for my mother who had died in 1985, everyone in my family of birth must have gathered at some point during my visit.  I could extrapolate from other times to describe the likely festivities but as for actual memories, I have none.  Whatever I retained of the celebrations has faded now.  Dinners were cooked and shared; gifts exchanged; snow felll upon the city.  Eventually I boarded a train, traveled  back to Kansas City, and eventually, south, to my home in Winslow.  Of those days, I recall nothing.

But of the hours on the eastbound train, my recollection remains clear.  I hear the voices, the laughter, the greetings, the offers of help and the glad acceptances.  The sense of calm which settled over me as the train sped across my home state to the city of my childhood lingered and I can recall it to this day.  I summoned the memory of that journey when immediate events overwelmed me in the tumult of the years which followed.  Somehow, its quiet moments came to signify something to which I can turn within my darkest hours.  In gladder times, that tender respite can still convince me of the potential that I will, after all, find peace.

It’s the twenty-fifth day of the seventy-second month of My Year Without Complaining.  Life continues. 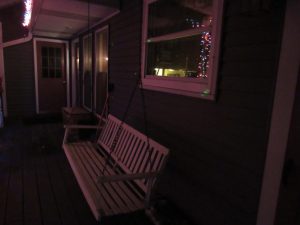