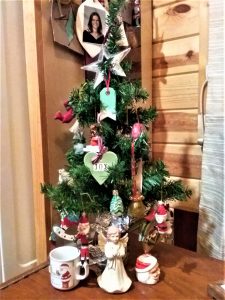 My mother converted to Roman Catholicism at Blackburn College in 1943 or 44 while working on her Associate’s Degree.  She met my father two years later and married in October of 1946 before finishing her nursing degree, which she later confessed regretting.

I never considered myself a “Christian”.  Despite a white-knuckled near-miss encounter with the mighty Missouri in the mid 1990s during which my friend Alan White challenged my lack of belief in the divinity of Jesus Christ, I continue to bypass the alleged son in favor of a more broad understanding of an omnificent deity.  Perhaps this proclivity flows from an early realization that middle-men rarely deliver the full goods — you should pardon any perceived sacrilege.

Though raised Catholic, I came to a different manifestation of faith than my early schooling relayed.  God and me — we have a basic deal.  I do the best I can by God; and God does the best God can by me.  I avoid pronouns; I skirt around an anthromorphistic view of the Almighty. I go right for the big picture.  “Do unto others” gets immediate acknowledgment from me.  “Father, son, and Holy spirit” not so much.  I mean, let’s be real:  I can’t buy the concept of a Heavenly Father, my earthly one being a bit of a rotten bastard.

But I have never doubted the existence of angels.

I had my first celestial encounter in 1976 while living in south St. Louis.  I kept coming home to signs of intrusion, creepy manifestations that suggested a person with a key and a grudge though I knew of neither.  My clothes would be tossed on the floor.  A record spun on the turn table, needle scratching in the last track.  Pictures throughout the apartment mysteriously turned themselves downward or face-to-the-wall.  I stopped drinking alcohol for weeks, in case I was over-indulging without memory and trying to freak myself out.  Still the weird happenings continued.  My father changed the locks on the apartment one Sunday afternoon.  On Monday I came home from work to find that the ice cube trays had been taken out of the freezer and left on the counter to melt.

One night, late, I struggled from sleep to the sound of a voice whispering my name.  In the darkened room, a figure stood over me.  Wake up!  Wake up!  came the urgent whisper.  There’s someone in the house!  I leaped out of bed as the shape vanished and the back door crashed.  By the time I got into the kitchen, whoever it was had gone, leaving the door to the building swinging against the bricks.

I stepped in front of a VW on Westport Road in Kansas City on 09 February 1982.  The impact threw me three stories into the air.  I felt my essence fling itself from  my body. Hovering higher than the tousled curls on my head, I found myself wondering what it would be like to be dead.  A sort of peace spread through me.  Then I heard a noise and turned my gaze.  A light spread across the sky; from it, a face emerged.  I watched as the being raised a hand, touched the place where the top of my head would be.  It’s not your time, said a gentle voice, and pushed me downward, into my falling human form.  I coiled myself into a ball just before landing on the hood of the VW and crashing into its windshield.  Well, I’m not going to die of a head injury, anyway, I thought,  as I flew forward and smashed on the street.  I heard the voice once more, reassuring me:  All will be well.  My leg had broken in 32 places and I had lost a contact lens, but shed not a single drop of blood.

In September 1984, I walked with my mother in her garden, just months after her cancer diagnosis.  An angel came to me last night, she calmly disclosed.  She said I had less than a year to live, and I’m okay with that.  I asked how she knew it was an angel.  She rendered a perfect description of the being who had shaken me awake nearly a decade before then.  I didn’t explain the coincidence, but I never doubted the celestial nature of her visitor.  My mother died on 21 August 1985.  As I watched them load her body into the back of the hearse, I searched the sky for signs of a heavenly choir. 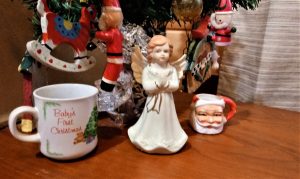 well over the years.  From the wall near my writing desk, my collection of china angels watches the Delta seasons change through the eastern window.  I found a new one this weekend on a crowded shelf at a thrift store in Sacramento.  My little treasures seem to come to me when I most need them.  The newest angel sits on the table under the tiny Christmas tree, a serene smile adorning her delicate face.  I have no doubt that she will keep me safe as winter unfolds and this wearisome year draws to a close.

It’s the sixteenth day of the seventy-second month of My Year Without Complaining.  Life continues.