I asked myself a hundred times why putting something —  even a three-foot tall air cooler — back into its original box could possibly defy every blessed effort.  After an hour, I finally texted my neighbor Macrina.  She had the whole reboxing done and the unit in the back of my car within three minutes.  I tried not to feel inadequate as I thanked her and got ready to drive into Lodi.

The little gaggle of customers at the UPS store stood in a vague line staring at the red-headed clerk and a flustered woman with chalk on the back of her pants.  I occupied the enviable position of next to be helped, but the boy kept shuffling between a computer to one side and the counter, earnestly conversing with the lady as her hair drifted from a loose ponytail.  I contemplated the two-wheeler standing by the back wall, figuring  the odds of my navigating the box from my car without costing myself a two-hundred dollar refund.

Two more customers swung through the door, stopping cold at the sight of us.  I grew increasingly concerned about asking the store employee for help with six other people waiting and him clearly alone.  I turned and announced that I needed to get a large box inside, and wondered if anyone might assist.  The guy behind me, big, burly, with a small package balanced on his foot, looked down and over at something fascinating just beneath the parcel.

“I’d be glad to help,” I heard, and sought the face of the volunteer.  A pudgy man, who looked as though he might be only slightly more capable than I am, grinned at me.  Out at the car, he hoisted my package  onto his shoulder.  I recalculated my opinion of him as I dashed over to the entrance just as the lady who had been in front of me emerged.

A few minutes later, I headed towards the drugstore, grateful for the absolute ease of the return process.  I tucked the receipt into my glove compartment at a red light, turned east, and starting looking for the CVS.  As I drove, I had a sickening recollection of my new ATM card sitting on the desk in my writing loft.  I shook my head.  Up, down; good, bad; easy, hard.  I did not have the energy to go into the bank to make my deposit.  It would have to wait for the next trip into town.

I caught sight of my eyes in the rear view mirror as I parked.  My head fell forward onto the steering wheel.  I sat completely still for the span of three long breaths.  It’s going to be all right, I whispered.  Everything is going to be all right.  I resisted the temptation to recite a litany of those items as to which the outcome remained hauntingly uncertain.

On the way back to the island, I made an illegal turn into a Starbucks drive-through.  Sometimes I just need a tall Americano.  I nursed the drink over both bridges and onto the levy road.  I turned Neko Case louder as I made my way between the shimmering river and the wide stretches of summer cropland.

It’s the second day of the fifty-fifth month of My Year Without Complaining.  Life continues. 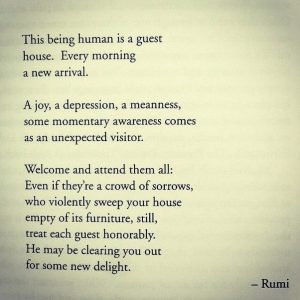 We St. Louisans have always been a little nuts about Tennessee Williams.  We all covet our own stories which relate to him.  For myself, it’s a double-whammy:  My father lived near to one of Williams’ boyhood apartments, though not at the same time; and I once directed a truncated version of The Glass Menagerie.  Put aside that he occupies a grave in the same cemetery as my parents and my father’s kin, including my great-grandmother Corinne Hahn Hayes for whom I am named.

I chose The Glass Menagerie when I got a chance to direct in high school because I relate to Laura, the forlorn daughter of the missing father and desperate, scheming mother.  She comes across as frail and pretty; shy and welcoming.  Her legs do not work properly, due to some mysterious ailment which isn’t quite explained, probably polio.  She suffers from pleurisy, which also plagues me.  I think of her as a romantic version of my crabby self.

But I have been told that I’m more like Blanche Dubois in Streetcare Named Desire, depending on the kindness of strangers and a little pathetic at that.  Perhaps so, perhaps so.  I suppose her cloying, slightly demented nature combined with her shrewish whine  prompts the comparison.  Certainly I have no enviable beauty.  Most apt of all qualities, my proclivity to rely on the kindness of strangers validates the comparison to this least desirable of Mr. Williams’ women.

When I arrived at home yesterday, Davin came out of the kiosk at the gate to tender two packages.  I knew them to likely contain chair cushions that I ordered in my maniacal quest to improve the seating in my tiny house.  We talked for a few moments, mostly about his mother’s recent medical scare.  I have a special tenderness in my heart for only sons.  Then Davin loaded the boxes in my car and I drove away, cautiously, holding my speed to the demanded five miles per hour especially given the rising sound of children playing nearby.

I paused again adjacent to the swimming pool to wave to Christina, who tarried in a chair beneath an umbrella.  I called to her, Watcha doin’, girl? and saw the broad smile rise on her face.  Getting cool! came the answer.  I waggled my fingers and turned back to the road, to the crunch of gravel under the tires and the fluttering hummingbird which tarried near my windshield.  I waited for the tiny critter to pass before proceeding.

At the house, I studied the boxes, determining that I should open them where they sat.  I could have asked my neighbor to carry them into the house. I certainly might have lugged them myself.  They did not seem heavy.  But then I would have to haul the packaging back outside for transport to the recycle bin. I find it best not to needlessly accumulate belongings since I occupy 198 square feet (slightly more, when measured vertically).  I strive to limit my possessions to no more than bare necessities.

Indeed, the boxes contained cushions, one of which seemed different than the picture suggested.  I must be used to disappointments, because I hoisted the lot onto my shoulder and started toward the house.  Just before I reached the porch, I encountered the hummingbird again.  I had no doubt that it was the same creature.  I fancy that I’ve learned to distinguish the markings of the small beings which frequent the park, like the jays which feast on my peanuts and the starlings which chatter overhead.  I studied the bird as it hovered near the door, then watched it flit away, bound for my neighbors’ feeder — for sweeter pastures, and more tender ministrations than I provide.  I watched until I could not see it against the dazzle of the mid-day sun, and then went into the house with my burden.

It’s the first day of the fifty-fifth month of My Year Without Complaining.  Life continues. 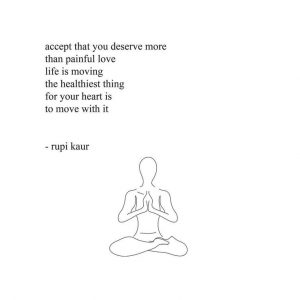 Nothing will ever dim the memory of a nine-year-old boy standing at the microphone captivating several hundred adults with simple words of fear and resolve.

My mother was an immigrant, he told us, in high, clear tones.  She came to this country for a better life.  What if I had been with her then? What if I had been torn from her arms?  How scared would I have been!  What if I did not have my cozy home, my favorite toy, my mother who loves me?  We must stop this!  We must help these children!

The crowd remained silent during his impassioned words.  I stood with them, alone but somehow not alone in this sea of citizens.  Later I would scroll through my phone and search in vain for a snapshot of that child.    Despite scores of images, I could not find his face.

As I drove further west in the afternoon, I thought of that boy and of the children whose terrible plight we had gathered in Vacaville to protest.  I replayed in my mind the words of a family therapist confirming what I know from my work with abused children.  The impact of the separation from their parents will irreparably harm those children, most of whom hover in the stages of development critically keyed to the positive influences of bonding.

As I turned towards the bay in Vallejo, other images fought for my attention.  A catalog of losses — mine, some of them; but not all.  The hours spent reading my collection of Saturday Musings has reminded me of the pain of past clients about whom I wrote.  My work as a child’s advocate, as a parent’s attorney, and as a divorce lawyer, provided many chances to hear stories of loss time and time again.

I got a soda from a dockside bar and descended the ramp to the outside tables which floated on a loosely moored pier.  I sat with a book in hand and watched the ferry make its way towards the other side of the San Francisco Bay.  I closed my eyes and surrendered to the gentle sway of the impermanent perch.

Another memory came to me.  My brother Frank and I stood on his street in the gathering doom, the night before I drove to Chicago with some furnishings from our Kansas City house to give my son.  Our conversation turned serious for a few minutes.  He folded his arms and gazed into the darkness.  Unexpectedly, he mentioned our childhood.  He said he didn’t much like to talk about the past.  He said, “Our father was an asshole and our brother killed himself, okay; so what’s happened for the last twenty years?”  I smiled, knowing he could not see me.  His statement summarized the place at which I’ve yearned to dwell.

Before I left Vacaville today, I found a used bookstore.  The clerk asked me if I had a credit account. I told her that I was from out of town.  “You look tired,” she observed.  “Have you driven a long way?”  I shook my head.

“I live in the Loop,” I explained, using a reference that everyone here recognizes.  She asked what brought me to town.  “The children’s march,” I responded, and when she looked puzzled, I told her that there had been a rally to protest the separation of immigrant children from their parents.

She said, “Oh, I never go to rallies,” as though I had questioned her absence.  “I don’t have time for that kind of thing,” she concluded.

I did not want to leave her with the impression that I questioned her lack of involvement.  I smiled and said, “I on the other hand, have a lot of free time just now.”  I thought a moment and added, “so I do what I can to help because children are involved.”

She returned my smile.  “Then God bless you, ma’am,” she answered, with an undeniable sincerity.  I had started to turn towards the door.  I stopped and looked at her.

It’s the thirtieth day of the fifty-fourth month of My Year Without Complaining.  Life continues. 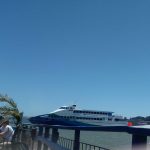 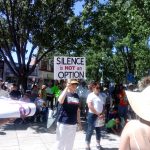 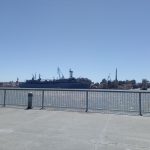